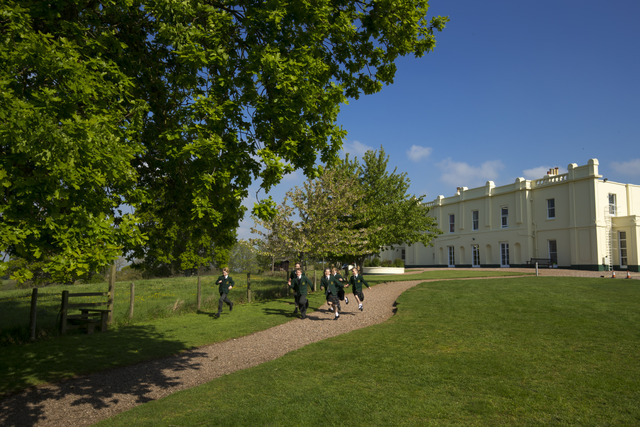 St Peter’s is set in 28 acres of beautiful countryside with stunning views over the Exe Estuary. A traditional, yet progressive prep school.

In the extensive grounds of our school, we have:

St Peter’s pupils benefit from outstanding teaching in small class sizes where children of all abilities have the individual attention they need to enable exceptional achievement and challenge.

Year 8 children gain 100% success rate of entry to their chosen senior schools and many leave us with academic scholarships or with scholarships in art, music, sport or drama.

Prospective pupils and parents are welcome to visit at any time. Please call 01395 280335 to make an appointment for a tour and meet our Head, Mrs Charlotte Johnston.

Scholarships at St Peter’s Preparatory School recognise outstanding academic; art and design; music; performing arts and sporting ability. Children can apply for scholarships in the January of Year 6. If they are awarded a scholarship, it will come into effect for their Years 7 and 8 at the school.

The deadline for scholarship applications is Monday 15 January 2018.

The entrance examination for academic and all-rounder scholarships will take place on 22 January 2018.

Assessments for art and design; music; performing arts and sport will be held on 22 and 23 January 2018.

If you have any questions, please do telephone Ms Rachel Elliott (Registrar & Marketing Manager) on 01395 280335.

All Year 8 pupils who took the entrance exam passed and, between them, they have been offered four academic awards. Thirteen pupils from Year 8 at St. Peter’s Prep School in Lympstone sat the entrance examination for Exeter School this month.

Head of St. Peter’s Prep, Mrs Charlotte Johnston, comments: “We are delighted that 100% of our pupils who took the Exeter School entrance examination passed it and even more pleased that, between them, they have been offered four academic awards. This success is a testament to all of my colleagues’ hard work in helping our pupils achieve their potential, as well as, of course, all the effort and application put in by the children themselves.”

Children who have chosen Service as an activity visit Pinewood Residential & Nursing Home every Friday afternoon.

6th December 2016 — St. Peter’s Prep School in Lympstone runs twenty activities on a Friday afternoon where all its Year 1 to Year 8 pupils, a total of 227 students, can select from things like American football, yoga and horse riding. However, one of the activities on offer is Service and those children who choose to join this group have been visiting Pinewood Residential & Nursing Home this term. These pupils spend time chatting with the residents and playing games.

Last month, 11 year old William Olney brought a tear to Tony’s eye - a resident at Pinewood - with his performance of ‘The Last Post’ on his cornet. Miss Hoare, who is a Year 6 teacher at St. Peter’s School, comments: “We have received lots of compliments from the staff, residents and families on the manner in which our pupils interact with the residents and we are delighted with the mature way in which they have been conducting themselves at Pinewood Residential & Nursing Home.”

Mr Chris Hoban, director of music at St. Peter's, comments: "We are very excited that singers from St. Peter's will have this fantastic opportunity to perform new English translations of the chorales from writers of different faiths and backgrounds alongside the professional singers of the English Touring Opera. Furthermore, they will be conducted by Jonathan Peter Kenny who was a choral scholar at Exeter Cathedral whilst at Exeter University and is now the music director of the ETO."

Tickets costing £12 to £25 are on sale online now or by telephoning Exeter Northcott Box office on 01392 726363. (Half price for all under 26s) and £5 restricted view tickets are available on the door only. The concert commences at 7:30pm and the running time is 1 hour and 47 minutes.

Mrs Charlotte Johnston has taken over as Head of St. Peter's Prep School in Lympstone.

24th September 2016 — The new Head of St. Peter’s Preparatory School, Lympstone, Charlotte Johnston has taken up the reins this month.

The school’s first female head in its 80-year history says: “I believe passionately that a prep school setting, with an ambitious ethos and traditional core values, provides the best opportunities for children”.

She will be looking to make the most of the school’s wonderful position, close to both moorland and coast, as well as developing its history of innovation and excellence - in particular the unique St. Peter’s Baccalaureate. Mrs Johnston achieved a double first from Birmingham University then joined the consultancy team at PriceWaterhouseCoopers (PwC), deployed in America, Europe and the UK. After starting a family, she retrained as a teacher and was later promoted to Deputy Head at Edge Grove.

“Having come from an established prep school I am used to satisfying the aspirations of parents, and sending children on to top schools. I look forward with excitement to doing the same here.”

Please contact Ms Rachel Elliott, Registrar & Marketing Manager, on 01395 280335 to book into a School In Action morning or Open day or, alternatively, to arrange for a tour of St Peter's by the Head, Mrs Charlotte Johnston.