St Paul’s is an independent school offering an outstanding, all-round education for gifted boys aged 7 to 18 years. The School has been educating young scholars for over 500 years and its entry points are at 7+, 8+, 11+, 13+ and 16+. Admission is following a successful examination process and interview.

St Paul's founder John Colet opened the doors to the School in 1509 to educate boys “from all nacions and countres indifferently”, regardless of race, creed or social background. The School is committed to the founder’s vision and offer financial support for a variety of boys who are successful in the entry procedure and fulfil the bursary criteria. 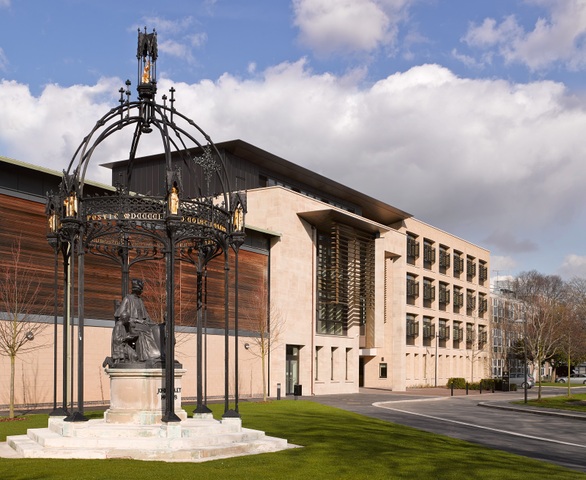 St Paul’s School is delighted to announce it has appointed Sally-Anne Huang to be the next High Master of the school from September 2020. Sally-Anne will be the first female Head in the school’s 510-year history.

27th June 2019 — St Paul’s School is delighted to announce it has appointed Sally-Anne Huang to be the next High Master of the school from September 2020. Sally-Anne will be the first female Head in the school’s 510-year history. She will replace Professor Mark Bailey who has been on indefinite leave of absence from the University of East Anglia since 2011, to which he will now return as Professor of Later Medieval History.

Sally-Anne has been Head of James Allen’s Girls’ School in Dulwich since 2015. Prior to that she was Headmistress of Kent College, Pembury and Deputy Head at Roedean School, Brighton. During her first year at St Paul’s, she will also serve as Chair of the Headmasters’ and Headmistresses’ Conference (HMC), the professional association representing the UK’s leading independent schools. She is currently a governor of Tonbridge School and Bolton School (where she was educated). Sally-Anne read Classics and English at Lady Margaret Hall, Oxford.

Sally-Anne will join St Paul’s at an exciting time in the school’s history and will take up the reins of an ambitious development campaign, which will see the number of pupils in receipt of bursary support increasing as well as significant investment in the school’s partnership work with state schools and other community partners.

Johnny Robertson, Chairman of Governors, St Paul’s School said: “The St Paul’s governing body takes very seriously its duty to preserve the unique qualities of St Paul’s and to ensure the school has strong leadership. We are extremely grateful to Mark Bailey for his exemplary service, over what will have been nine pivotal years in the history of our school. We are now pleased to have secured the services of an experienced and highly regarded Head and we look forward to welcoming Sally-Anne to the school as the 35th High Master”.

Sally-Anne Huang: ‘I feel enormously privileged to have been selected as the next High Master of St Paul’s and to have the opportunity to continue the outstanding work of Professor Mark Bailey. It is clearly an exceptional school with the highest standards in all areas. I am very mindful of its individual qualities and traditions as well as excited to have the chance to strengthen and widen its work and influence into the future, including through the provision of bursaries and community outreach.’

1. St Paul’s School is situated on 45 acres on the banks of the river Thames, by Hammersmith Bridge, and is one of the UK’s leading independent schools, offering an outstanding all-round education for some of the brightest boys in the country.

2. Founded in 1509 by John Colet, Dean of St Paul’s Cathedral, to educate boys “from all nations and countries indifferently,” regardless of race, creed or social background, St Paul’s School remains committed to this vision today.

3. The title of High Master was established in the school’s original statutes.

St Paul's School commemorates the 490 pupils who fell in the Great War through a cross-departmental project incorporating History, Art and Geography. Every pupil has helped plant ceramic crosses around the school’s war memorial for Remembrance Sunday

8th November 2018 — This Sunday 11 November marks the centenary of the end of World War I. Of the 800,246 British and Commonwealth soldiers who lost their lives in that war, 490 were local boys who attended St Paul’s School. In honour of these young men who paid the ultimate sacrifice, around 100 pupils and staff in both the senior and junior schools have been researching their forgotten stories.

The ‘St Paul’s School WWI Research Project’ has involved many subject areas across the school. Beginning with the History Department, the pupils have been using online resources including the Commonwealth War Graves Commission, as well as newly digitised copies of the school magazine from the early 20th Century and sports team photographs from that time, to create an online archive of the young men. Men like Indrulal Roy, who was killed in action aged just 19 when his plane went down in flames over Carvin, France and who posthumously was awarded the D.F.C. (Distinguished Flying Cross) or Cecil Lambert, an exceptional rower, who awarded the Military Cross after he was killed by a shell aged just 21.

Mr Seel said: ‘A number of pupils reported to me how moving they found the research process and how exciting it has been to work with original sources. It has been a privilege to help our current pupils research the history of these brave young men who were just at the cusp of extraordinary futures’.

The pupils then worked with the Geography Department to use GIS software to map the location of the place of internment or commemoration of each of the 490. Most fell throughout Europe but some of the young men were fought in battle as far afield as Egypt, Iraq and Tanzania.

The final element of the project was with the Art Department where all Year 9 pupils have hand-made 490 ceramic crosses. Each cross bears the name of a pupil who fell in the Great War. Every tutor group in the senior and junior schools has helped plant these crosses around the school’s war memorial in the fortnight leading up to Remembrance Sunday, creating a living reminder of the sacrifice made by a lost generation. On Friday 9 November, all the pupils will attend a service of commemoration where the names of the 490 young men will be read out followed by a two minute silence and the Last Post.

Mr Grant, Director of Art, said ‘The 490 crosses now surrounding the school’s cenotaph are such a visual and poignant tribute to the generation of pupils who lost their lives in the Great War’.

After Remembrance Sunday, the crosses will be sold to support the Thomas Gresham Bursary, a pupil-led bursary fund which aims to provide a 100% bursary to the highest performing boy at 11+ who is in need of financial support to attend St Paul’s.

11th July 2018 — The 1st VIII has been strong all season, having won the Championship Eights' event at the National Schools' Regatta earlier in May and setting a new record for the Schools' Head of the River.

Over a blistering hot weekend, the team overcame Abingdon, Latymer Upper and Radley on their way to the final and had generated huge excitement on the bank throughout their journey. The results spoke for themselves when the St Paul's 1st VIII broke the course record by 11 seconds, beating Eton 'Easily'.

Henley Royal Regatta reported on the final: "Simply Awesome. For the crowds on the bank today they have witnessed a truly amazing part of history. Bobby Thatcher’s St. Paul’s School have been favourites for this event all season and their performance today did not disappoint. On the day, Eton College were completely outclassed. The crew equalled the Barrier record, beat their own Fawley record and then destroyed the course record by 11 seconds to win in a time of 6:06. The best schoolboy crew. Ever."

10th July 2018 — SureLight, a YE Richmond-Kingston team, from St Paul’s School, scooped the top prize of the evening. The team created a smart brake light for bicycles and the judges were blown away by the team’s creative and entrepreneurial flair. The overall winning team is judged against a strict set of criteria including innovation, sales, marketing, financial performance, social impact and teamwork.

The final was held at County Hall, London, on Friday 6 July, and celebrated the top 14 student companies set up and run over one academic year as part of the Young Enterprise Company Programme. Young Enterprise works with over 250,000 students every year and this year 20,000 young people set up and ran a real business with the Company Programme, which is supported by HSBC.

The young entrepreneurs from St Paul’s School had already been crowned best company at the London regional final, but will now go on to represent the UK in Belgrade at the European final.

Luke, Operations Director from ‘SureLight’ said:
“Fantastic. Incredible. Amazing. It is not what we expected at all. It’s been an amazing experience and we’re just so thankful to the judges and the sponsors for everything.”

“We’re delighted to support the Company Programme with HSBC volunteers working with students across the country. It’s fantastic to see students deal with real life business decisions and develop employability skills such as creativity, resilience and communication. The Young Enterprise scheme is a great way for young people to gain invaluable entrepreneurship skills preparing them for the future world of business.”

“I’d like to congratulate the students from ‘SureLight’ for winning HSBC Young Enterprise Company of the Year Award. The award has been generously supported by HSBC who, like Young Enterprise, firmly believe developing creativity and employability skills can have a real impact on young people’s futures.

You don’t get this stuff from a text book and we are greatly encouraged by our research which shows that 94% of Company alumni go on to education, employment or training – 7% higher than the national average.”