St Catherine's School, Bramley, is an independent boarding and day school for girls aged 11 -18. Founded in 1885, the school enjoys over a century of tradition and prides itself on its own very special blend of academic excellence and pastoral care.

St Catherine’s is one of the country’s most successful independent girls’ schools, conveniently situated near the Surrey - Sussex border on the Horsham Rd, 3 miles south of Guildford in Bramley village. St Catherine’s girls benefit from an exceptional, all-round education where happiness is considered one of the fundamental keys to success. Examination results are outstanding - 14 girls were offered Oxbridge places this year and the vast majority gain places at their first choice universities, mostly from within the prestigious Russell Group. Classes are small and because we are single-sex, far more girls opt for the STEM subjects (Science, Technology, Mathematics) than in co-educational schools. Moreover, in whatever subject they take, they are not afraid to feel pride in working hard and in being successful. However, there is more to St Catherine’s than academic excellence. Our sportswomen enjoy the finest facilities in the country. In lacrosse the First and U14 teams were crowned national champions this year. The girls have also done extremely well on the Surrey circuit in a variety of sports–Senior School teams are netball and athletics County Champions. A major highlight of 2014 was the visit by HRH the Duchess of Cornwall – direct descendent of St Catherine’s founder and benefactor, George Cubitt, 1st Baron Ashcombe. The Duchess officially opened the Anniversary Halls auditorium and the new Speech Hall Library. She met the cast of the Senior School’s production of Hamlet, being performed that week. This edgy, contemporary production, found its way to three substantial audiences, and received great acclaim. Earlier in the year, the Middle School had also impressed with their stunning adaptation of The Tempest. The standard and variety of Music at St Catherine’s is simply outstanding. There are over 640 music lessons taught every week. Throughout the year, girls demonstrate their musical passion and talents in numerous concerts, both formal and informal. The Anniversary Halls auditorium has better acoustics than many London venues for the flagship choirs, orchestras and drama productions. With grounds of 27 acres, all facilities are on site, including a multi-purpose sports hall, gym, dance studio, fitness suite and indoor pool. Consequently, extra-curricular provision is very extensive. For busy working parents, it is also good to know that Senior School girls can stay at school to complete their prep. , fully supervised, or take part in the many activities there are on offer until 6.30p.m. Weekly boarding is another option which is increasingly popular. 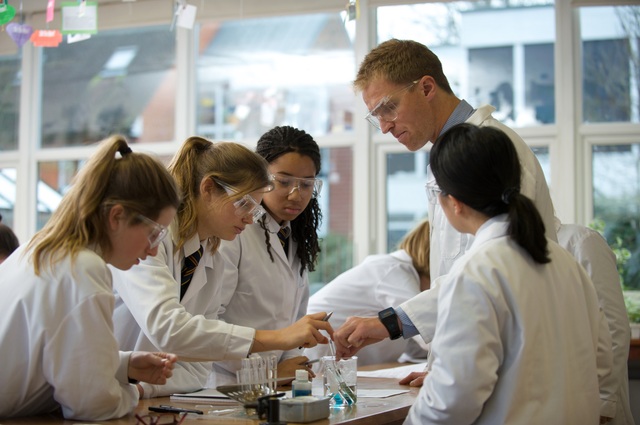 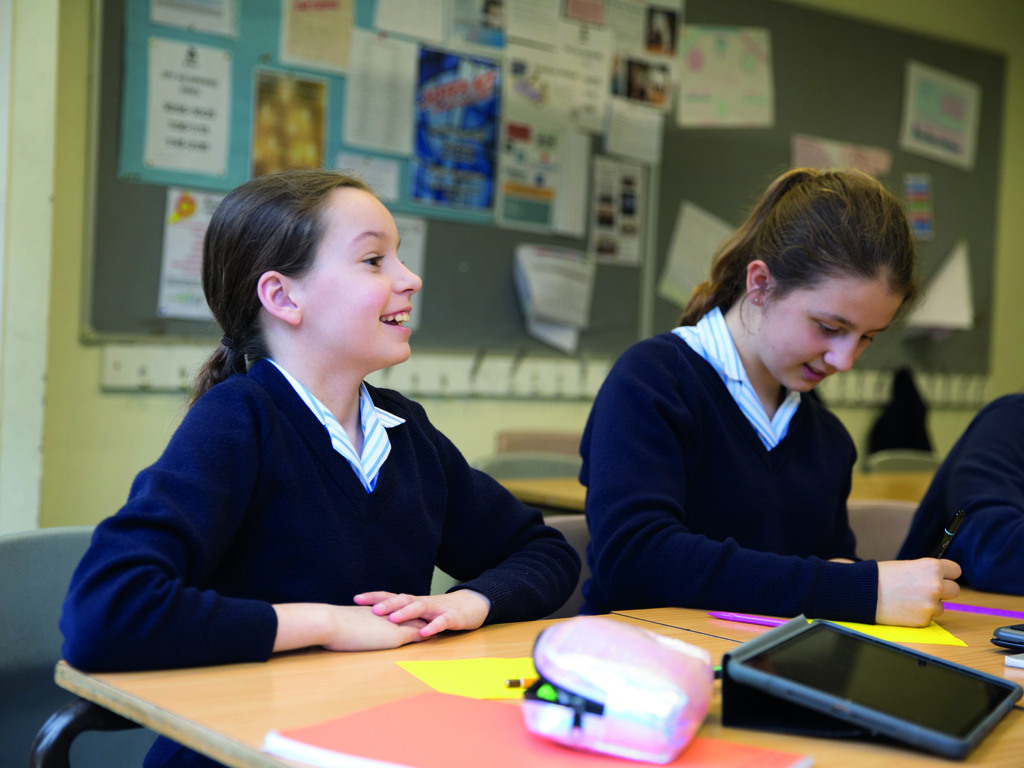 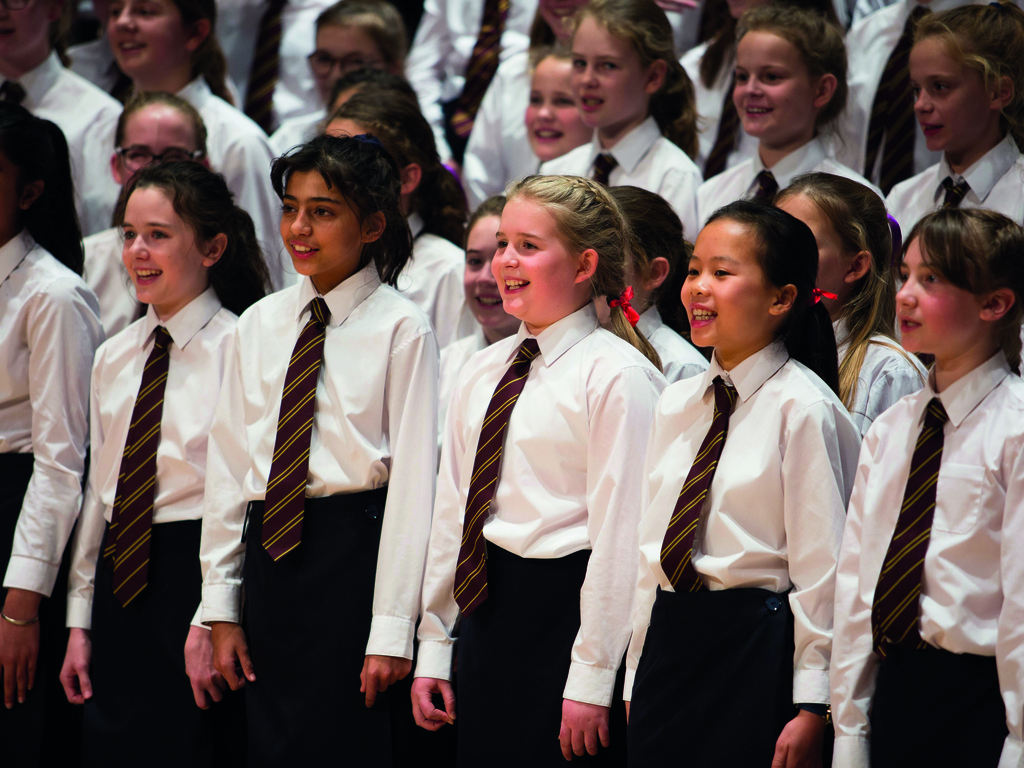 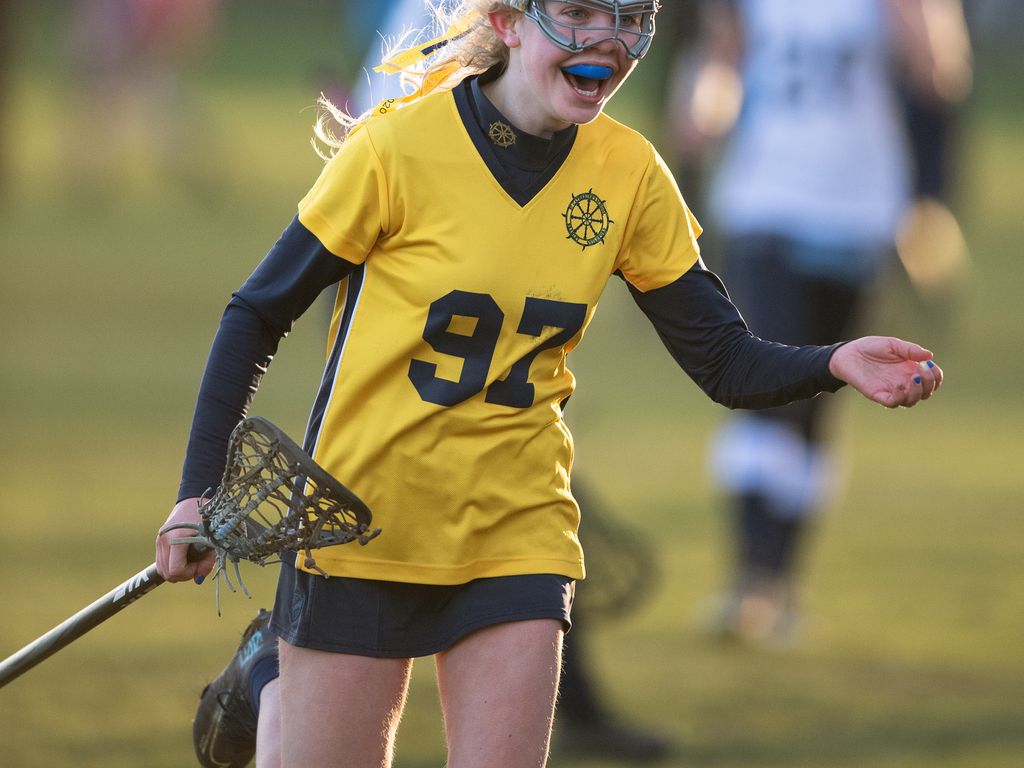 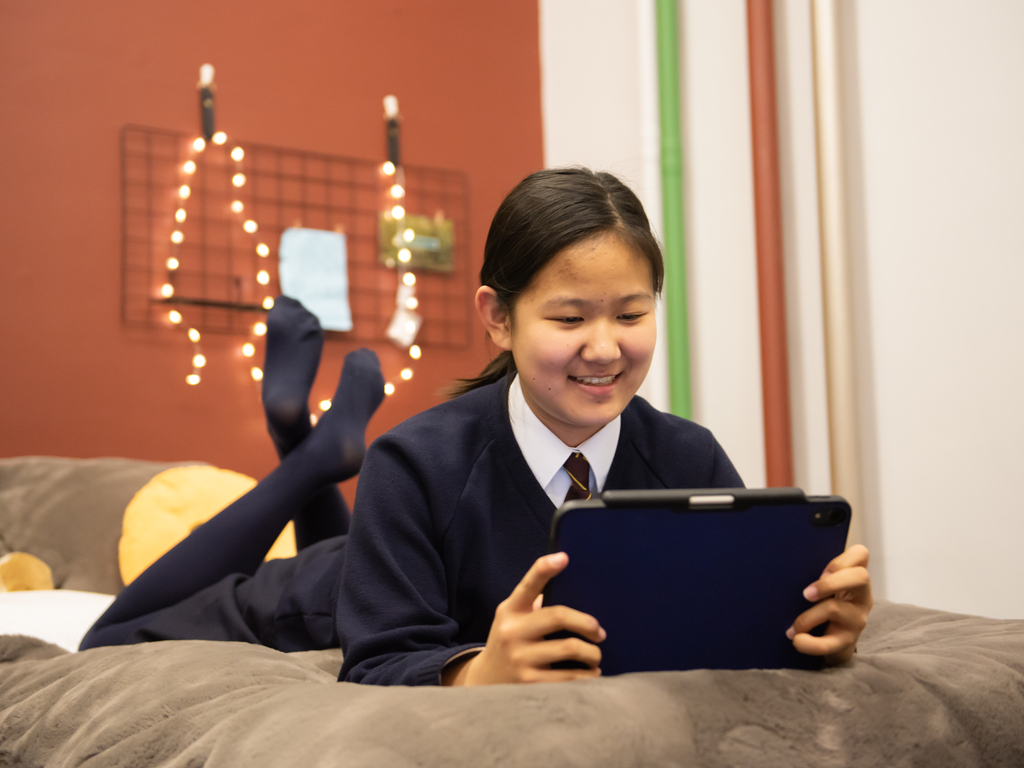 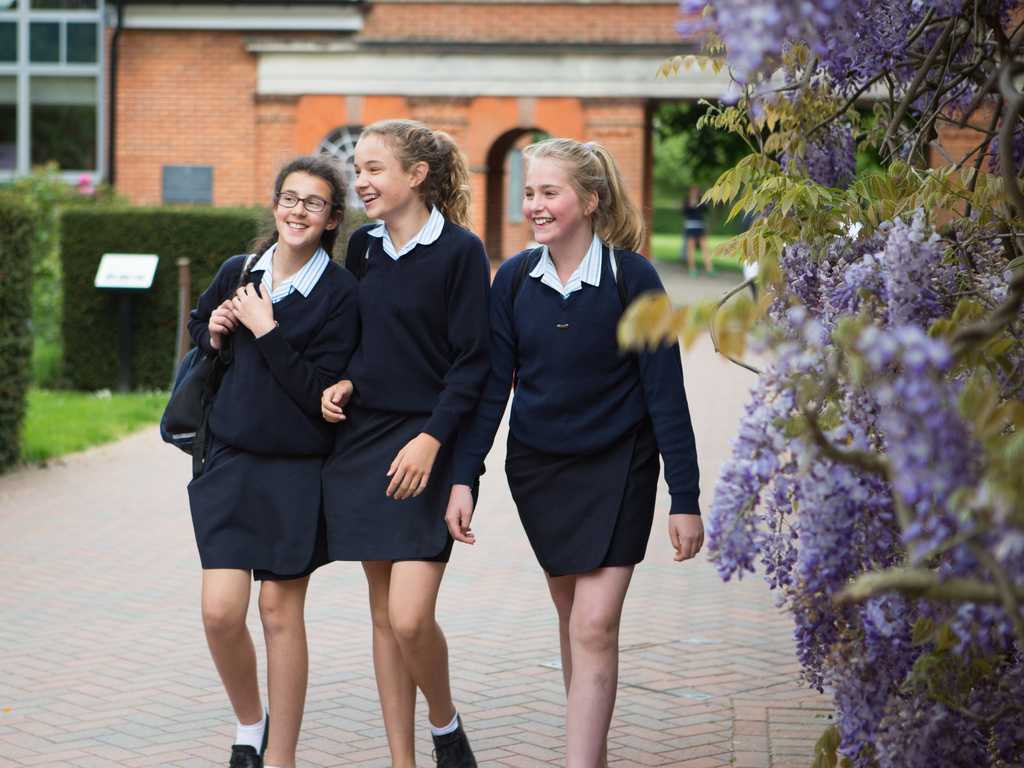 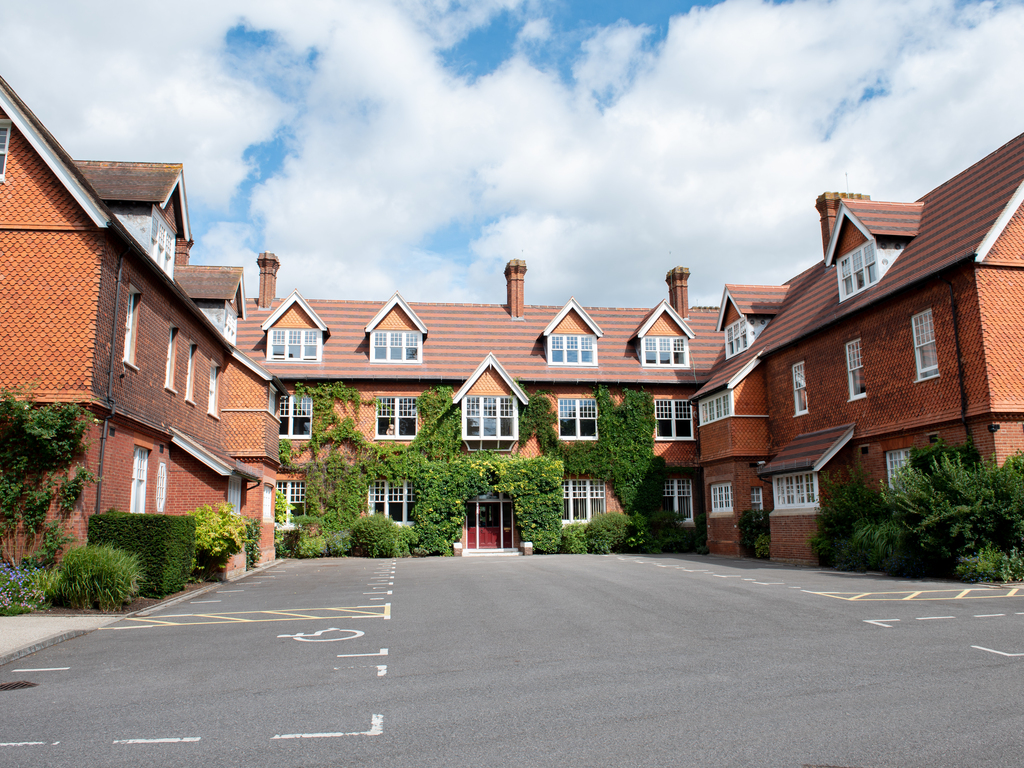 2019 - Another year of consistent all-round achievement is being celebrated at St Catherine’s, Bramley. Whilst top grades are down nationally this year by 0.9%, St Catherine’s candidates have increased theirs!

15th August 2019 — St Catherine’s is delighted to report another year of outstanding achievement by our A Level students who gained more A* grades than ever before in the new and challenging linear A Levels. With a 100% pass rate and 88% A*/B almost all our candidates have met their university offers comfortably for courses across the full gamut of subjects: Medicine, Dentistry, Maths, Engineering, Law, Nat. Sci, Psychology, English, History, Geography, Design, Animation; the list is long and impressive. We are once again very proud of all the girls and the staff who have taught them. Each also has an extensive extra-curricular portfolio and a work-life balance to be proud of. We wish them every success at university and beyond.

St Catherine's Girls are this year's winners of the Yachting Journalists’ Association Yachtsman of the Year and Young Sailor of the Year Awards:

14th March 2019 — The awards were held on the 45th floor of the iconic Leadenhall Building and hosted by MS Amlin Yacht after a breakfast reception celebrating Sir Robin Knox-Johnston’s 80th birthday.

Sir Robin,a four-times winner of the YJA Yachtsman of the Year trophy, presented the awards.

At 15, St Catherine's student Emily Mueller collected the award for winning the Volvo Gill Optimist British National Championship – only the third ever girl to win the national title. Emily said on winning the award: “It is just such an honour. I never really expected to go this far in sailing; I just did it for fun at first, but now I love the competitive element. It was all such a surprise because I didn’t even know I was nominated. Thank you all so much!”

St Catherine's alumna Nikki Henderson made history when at 24 she was the youngest ever skipper to compete in the Clipper Round the World Yacht Race. Nikki mentioned the recognition of female sailors: “It is a step in the right direction. I think it is important to recognise that the Clipper Race aspect isn’t just about the female skippers winning, but also the fact that almost half the crews are women. It is a really good example that the sport should not be all male; it should – and can be – a 50:50 mixed sport. I think that is what we really need to push for.”

Tracy Edwards, who inspired a generation of women as the skipper of the first all-female crew to compete in the Whitbread Round the World Race in 1988/89, has now extensively restored the yacht Maiden to play the central role in the Maiden Factor campaign to raise awareness of the education of girls worldwide.

A new generation of highly talented all-female crew members, including Nikki Henderson, are sailing Maiden on a world tour with over 23 destinations in 13 countries, flying the flag for girls’ education, working with local charities and supporting community-led educational projects.

St Catherine's Storms to Victory in the 2019 National Lacrosse Finals

St Catherine's Storms to Victory in the 2019 National Lacrosse Finals

6th March 2019 — Despite atrocious wind and rain, St Catherine's lacrosse teams battled on to victory in an exciting finale to this year's Lacrosse season. By the end of the tournament three St Catherine's teams had become 2019 National Champions: the 2nd and 3rd teams and the U15As. There were successes right across the board as St Catherine's fielded teams at every level from elite national team players right through to those girls who just play because they love the sport and the camaraderie, testament to St catherine's belief in 'sport for all'.

One of the lacrosse parents expressed it as follows:

'A huge thank you for the amazing lacrosse experience the U15s have had this year from the lax tour to winning Nationals which was obviously the icing on the cake.

However, as enjoyable as the winning was, there were other aspects of this year that made me very grateful to you as teachers and St Cats for the sporting ethos it encourages. These points stand out for me:

• Enjoyment and participating in sport - the success of your 2nds and 3rds teams and the fact 4ths and 5ths exist is just an incredible credit to St Cats and the way the girls are encouraged at all levels and how much they enjoy being part of a team.

• Encouragement of hardwork and determination - Watching someone like Olivia Dixon strive and work hard to reach the A team finally in L5. There are many schools where movement up is impossible and I just love the fact she finally made the A team and seeing her confidence grow this year has been a joy.

• Teamwork and responsibility - those girls have learnt that in spades - from self run team practices, pasta meals and hair plaiting - they are in no doubt that a team that works together achieves more than the sum of its parts

Praise Be! Sister Act proves to be a divine hit!

Praise Be! Sister Act proves to be a divine hit!

It's a disco inferno! When Philadelphia arrived in Bramley....

Nightclub singer Delores, witnessing a fatal shooting, leads to her being put into witness protection inside the quiet, backwater Queen of Angels Convent where she takes over the running of the rather untuneful choir. Much hilarity ensues as Delores as gives the nuns a new musical lease of life - the show was a huge, unashamedly disco ball spectacle complete with dancing nuns, live orchestra, lighting projections and some amazing costumes.

The directors were very keen to add ‘St Catherine’s’ style to the play. Eternal messages of friendship and the strength of women working together came through the play and added an extra dimension. Director Tansy Parkinson said ‘St Catherine’s girls epitomize the message that together, they can achieve anything’.

100 girls were involved in the project; acting, working backstage and in the band. Tilly Osunkoya, playing Delores, commented that, “Sister Act is hilarious to perform and such fun to be a part of. But the real highlight is building friendships with so many different people from all years of the school.”

Strong A level results testament to hard work and determination

Strong A level results testament to hard work and determination

Despite some of the media's recent downbeat assessment regarding the new A Level structure, St Catherine's girls have actually performed even better this year!

16th August 2018 — Alice Phillips, Headmistress along with many staff were here bright and early to congratulate girls, and a number of their parents, who came into school to celebrate their successful A Level outcomes. Even the rain could not dampen the party mood. Mrs Phillips remarked 'We are delighted with this year’s A Level results. Given the recent changes to examination courses, which have been widely reported in the media, St Cat’s girls have taken things in their stride and the A*-B pass rate of 90.4% is up on last year’s 90.2%.  We have retained the AS examinations which have also yielded very positive results in 2018 and will certainly help the girls as they apply to UCAS for university places in September 2019.’

She went on to pay tribute to both the staff and the girls for keeping their cool in what has been a fast-paced rate of change to the A Level structure. 'Their hard work and focus has paid dividends yet again'

University news is still coming in but as we go to press, the overwhelming  majority of 2018 leavers have gained entry to their first choice universities, mainly the Russell Group including Oxbridge.

Meanwhile sixth form student Anna Litvinenko is proof that St Catherine's encouragement of girls to pursue their individual interests as well as their academic studies works. Not only did Anna achieve A*, A*, A, A but she is also  one of the UK’s top performing ice-skaters.  She was selected to represent Great Britain last year at the European Youth Olympic Winter Festival in Turkey and is now making her mark in the senior women’s arena. She has managed to combine her training and academic studies extremely successfully which is testament to her hard work and determination.

Hard work and dedication have resulted in St Catherine's girls reaching the top in their respective sports - showjumping and sailing.

15th May 2018 — The St Catherine’s Equestrian team had a very exciting day in April at The National Schools Equestrian Association County Championships.

Emi remarked: "It was a choice of a safe clear round or putting my foot down and taking some risks, Flash was amazing, he  jumped and turned fast helping us get the quickest time of the class by 0.2 seconds".

These are both fantastic achievements and we look forward to seeing the future successes of the riding team.

Emily Mueller recently participated in the GBR Optimist Selection Trials for sailing. She was placed 14th overall out of 81 sailors and was the second highest placed girl.

As a result Emily has been selected to represent Great Britain at the IODA Optimist European Championships. This is an international event to which only 7 GBR sailors are invited.

Congratulations to both Emi and Emily. It is a great honour to be selected to represent your country and is well deserved after all the hard work you have put into training