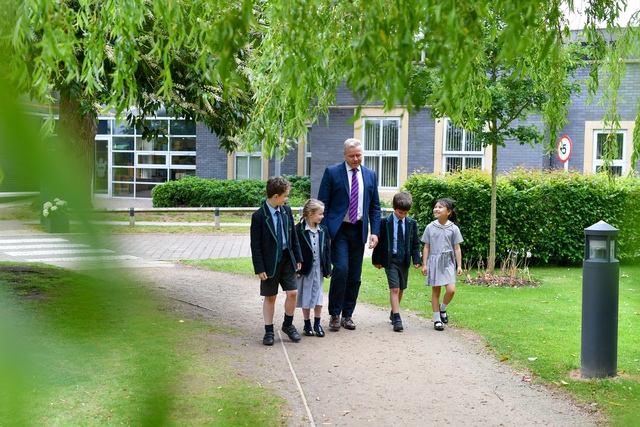 RGS The Grange is a school for children of 2-11 years, situated in a 50 acre site on the outskirts of Worcester. It is one of the Prep Schools that feeds RGS Worcester Senior School.  Children are happy, confident and successful in all that they do, whether academically or enjoying the wide range of Co-Curricular activity.

Enthusiasm, for children of primary age, is a fundamental requirement and one that will ensure that every child enjoys and succeeds here. Each and every member of our teaching team is expected to develop enthusiastic learners; children who are happy to face the challenges of school, safe in the knowledge that their contribution will always be valued and their enthusiasm rewarded. The children are offered a rich and diverse curriculum and the opportunity to develop skills, knowledge and enjoyment across a wide range of activities. Our children’s happiness is paramount and their wellbeing essential and so high levels of pastoral care are evident throughout. RGS The Grange offers a unique learning environment for its pupils as our provision, whether academic, sporting or in the preforming arts is of the very highest standard. Taught by enthusiastic and inspirational teachers our children benefit from an unrivalled education - we would love to show you our fantastic school so you can see for yourself.

RGSW represented by Matt Warne, Head of Computing and IT at RGS The Grange, shared our digital journey and learnings at the #EveryoneCanCode Summit in South Africa

23rd March 2020 — The RGS Worcester Family of Schools has embraced technology for teaching and learning and innovative local teacher, Matt Warne, has been demonstrating the benefits to other schools. Matt is an Edtech50 leader as well as being Head of Computing and IT at RGS The Grange.

This March, Matt presented at the #EveryoneCanCode Summit in Johannesburg, South Africa. The Summit is designed to bring together educators from around the world for a day of unique learning experiences with international leaders in technology to explore the tools they need to inspire students of all levels to create and innovate.

Matt’s ‘Everyone Can Code’ presentation started by sharing his story, from someone who had never coded to becoming a CAS Master teacher in Computing. Some of the key points during his talk were how to motivate children to engage with technology and how to explore all aspects of technology including robotics. He demonstrated how to help children grow and learn inside and outside the classroom with methods such as creating special coding clubs. RGS The Grange's ‘Girls Can Code’ Club has inspired many girls to see their potential within the digital landscape. The most important focus of the presentation was how to guide students to become global, digital citizens.

Matt also presented to the conference about ‘How to Build a Network within the Community’ and led three workshops about ‘Pedagogy in the Classroom’, ‘Robotics with Science’ and a 'Scratch Masterclass’. Afterwards, he flew to ParkLands Academy, an Apple Distinguished School, to present the RGS Coding Curriculum and how to implement iPads into Physical Education, an ongoing success story at RGS The Grange.

“To be asked to present at an international conference has been an absolute honour and without a doubt the highlight of my career,” Matt said, “I shared my passion for Computer Science with over 150 delegates from South Africa and learnt so much about the incredible country and educators who are drivers of change. Since working at RGS I have received nothing but support and encouragement to give something back to the community and to be able to do this at a global summit was an experience I shall never forget.”

We are immensely proud of his representation of RGSW and the importance of sharing our digital journey and learning with other schools, educators and industry leaders on an international stage.

RGS The Grange is proud to announce achieving an International School Award from the British Council, following our successful partnership with Collège Notre Dame in Cysoing, near Lille.

16th March 2020 — RGS The Grange is proud to announce achieving an International School Award from the British Council, following our successful partnership with Collège Notre Dame in Cysoing, near Lille.

The exchanges between the pupils ranged from sending videos of our pupils singing the English and French alphabet and our pen pals spelling out celebrity’s names in English and French, to letter exchanges where we could see the similarities and differences between our schools' handwriting. We shared videos of our everyday family lives and exchanging gifts that represented our School, Worcestershire and the UK. The icing on the cake was when the pupils finally met each other at Parc d’Olhain, during RGS The Grange pupils’ French residential trip to Le Touquet. We shared special moments including RGS The Grange singing a French song called ‘Vois sur ton Chemin’ and in return the French pupils singing English songs.

The British Council praised RGS The Grange for embedding “an international perspective to the curriculum and ethos of the School”, with activities that are “stimulating and motivating for all with real engagement and enjoyment engendered and language skills greatly improved through real-life and meaningful communication”.

Gareth Hughes, RGS The Grange Headmaster, commented "Giving our children an education that captivates their minds and brings them a sense of joy and a desire to learn is very important to us. It is just the beginning of our international adventure and we cannot wait to see where the next chapter will take us!"

The Hockey Regional Championships were held in Cannock this year, with the team starting well with a 1 -1 draw against Crescent School, Warwickshire. After some tactical changes and words of wisdom, the RGS The Grange boys went from strength to strength, winning their remaining group games 2-0, 3-0 and 4-0.

3rd April 2019 — The Hockey Regional Championships were held in Cannock this year, with the team starting well with a 1 -1 draw against Crescent School, Warwickshire. After some tactical changes and words of wisdom, the RGS The Grange boys went from strength to strength, winning their remaining group games 2-0, 3-0 and 4-0.

The semi-final brought a head-to-head challenge with their Worcestershire rivals, Bromsgrove School, where they managed to score the winner in the last minute to secure a place in the Final.

Knowing one last effort was needed the boys put in one of their best performances emerging 2-0 winners and ultimately, Midlands Champions, building on their success from last year.

Headmaster Gareth Hughes said: “This team are a talented and committed group of boys, and this achievement continues the school’s hockey successes of recent years. It is a testament to the high-quality coaching we provide and the positive attitude of the players.”

Pupils from RGS The Grange hit the high notes at the Royal Festival Hall in London on Monday 4 March as they took part in Barnardo’s National Choral Competition Finals.

6th March 2019 — Pupils from RGS The Grange hit the high notes at the Royal Festival Hall in London on Monday 4 March as they took part in Barnardo’s National Choral Competition Finals.

RGS The Grange Chamber Choir, who won Worcester Competitive Arts Festival Choral Category in March 2018, was thrilled to have the opportunity to compete in the Final of the Barnardo’s National Choral Competition.

The Choir, comprised of 50 pupils from Years Five and Six, sang in front of an audience of more than 2,000 people.

Head of Music, Mrs Keetley-Smith, said: “I am extremely proud of the dedication, hard work and talent of our children and their success in reaching the final of ‘The Barnardo’s National Choral Competition’. The standard for the competition was extremely high and to be selected as one of the top eighteen junior schools in the country is testament to the excellent Music provision we are able to offer at RGS The Grange.”

The Choir sang their two audition pieces during the morning, then gave an impromptu performance alongside the River Thames attracting many local passers by. During the evening concert they performed ‘Journey to the Past’ arranged by Audrey Snyder and joined in with ‘Barnardo’s’ and ‘World in Union’ massed choir songs, concluding a rousing and uplifting evening of entertainment, whilst importantly raising thousands of pounds for Barnardo’s Charity.

This is the latest in performances by RGS The Grange Chamber Choir, who have enjoyed performing in the local area, taking part in Concerts in venues such as Worcester Cathedral, The Three Counties Showground, Great Witley Church, St. Kenelm’s Upton Snodsbury, and Fernhill House Care Home.

Nathan Tomkin's Trust Working Together with RGS The Grange

Nathan Tomkin's Trust Working Together with RGS The Grange

The children at RGS The Grange were delighted to hear that the ‘Nathan Tomkins Trust’, whose purpose is to raise awareness of mental illness were awarding the school a grant for £1000. This is part of the new relationship between the school and the t

8th May 2018 — The grant will be used to purchase several table tennis tables which will provide a quieter option for break times within the school day and hopefully at the same time creating a new sporting interest at the school and beyond.

The School was recently visited by Jack Tomkins, a representative from the trust which was was formed a year ago in the memory of Nathan Tomkins, a keen sportsman who sadly took his own life after dealing with depression for some time.

Two members of staff have also been invited to attend a mental health awareness day that the trust has organised locally as part of their work in the community.

The school recognises that it plays an important role in the community at identifying children who seem to be struggling. The pressures and stress caused by modern living and the effects that social media can have is being highlighted to parents.

One RGS The Grange pupil, Ben Fellows has already created quite a stir at the school. Firstly, he won the RGS The Grange House Table tennis competition for his House, ‘Cash’. Ben then competed in and won the Under 11 Regional Table Tennis Championships.   This ensured that Ben gained access to the National Butterfly Individual Championships Finals which were recently held at Wolverhampton.

RGS The Grange welcomes former pupil who arrived in Helicopter

RGS The Grange welcomes former pupil who arrived in Helicopter

16th May 2017 — RGS The Grange School was delighted to welcome a former pupil as part of the school's 20th Anniversary celebrations. Lieutenant Luke Maciejewski born and raised in Worcester, aged 26 Years arrived as part of a 5 man crew on board a Merlin MK2 helicopter, and 10 ground crew supported this. The children were allowed to board the aircraft and have a look around, giving them the opportunities to ask a lot of questions.

Luke joined RGS The Grange in 1996 as one of the first pupils and went on to RGS Senior School where he stayed until 2009. He had from an early age, aspired to be in the Navy and it was a during a trip to Culdrose with the cadets from RGS at the age of 15 years, he decided he wanted to combine this with flying. Leaving School, Luke took time out to travel for eighteen months before embarking on his naval career. Following his travelling he joined naval college and six years of training later, he is now two weeks away from gaining his wings.

The helicopter flown in with all equipment is worth £50 million, weighs 16 tons and is the 16th Merlin helicopter to be built.
Luke is part of 824 Squadron based at Culdrose, Cornwall and surprisingly had a fear of heights until he was forced to overcome this during his time in training. Mr Gareth Hughes, Headmaster commented, "We are most grateful to 824 Squadron and the Royal Navy for arranging this unforgettable visit. RGS are proud of Luke's achievements and we thank him and his team for making this a wonderful experience for us all."

The helicopter stayed on site overnight before departing at 10.00am with a wave from Luke and his entire crew reciprocated by the children, staff and neighbours and returned back to base.