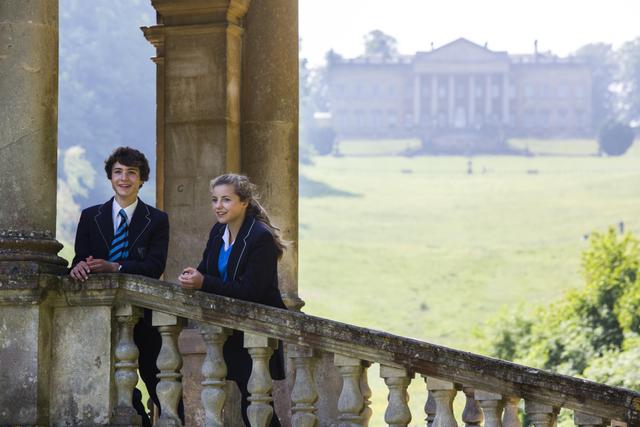 Prior Park College is one of the UK's largest, co-educational, Catholic, independent senior schools. Set in a breath-taking location overlooking the World Heritage city of Bath, the College has a friendly environment, extraordinary facilities and boundless ambition.

'Confident in its Catholic values, happy in its own skin and distinctive in its commitment to a genuinely all-round education, this is a school which inspires esteem and affection in equal measure.' Good Schools Guide

I am often asked by prospective families what makes for a good school. My response is that such a school must strive for the highest standards in everything it does – from the manner of all the staff to the work ethic and presentation of the students. Such standards breed a pride in the school and develop within the student an inner discipline and respect that they will take with them throughout life. But this is not the sole indicator of a good school.

A good school must have a clear vision for its students in terms of what is important now and what the school aspires to be in the future. A vision enables every student to share in the life of the school and to support the Head and the staff in achieving higher goals. A good school is never complacent, our ambition for the College continues to evolve and we are now in the process of finalising our 2025 Vision for Prior Park Schools.

Along with this vision the school must have a clear ethos which needs to be articulated by everyone involved in the school community and also a set of values which staff and students believe in and hold to be important. Such permanency in this fast and ever changing world gives the students anchors in their lives: Our ethos is to care for our students so that they feel empowered to develop their talents in many different ways. We also want our students to be rooted in the Christian values of consideration, compassion, kindness, service, contribution to others and an openness to God on which they can build their lives and which will be their inspiration in good times and comfort in bad.

Academic results are an important marker for any school and although gaining places at illustrious universities is significant, this  is not our only consideration. Whilst we congratulate those students who achieve the highest grades, we also celebrate those students who, through hard work, guidance and excellent support, accomplish more than they first thought possible.  Our results reflect our school’s passion, commitment and dedication to providing a truly outstanding education that gives our students the very best start in life.

The school’s primary aim is to provide a rounded education for each of our students and whilst academic endeavour remains at the school’s core, we also hope that our students contribute to the life of the College beyond the classroom. We encourage our students to embrace all the opportunities on offer. Prior Park pupils act and sing in first class performances; compete for their team; produce impressive pieces of art and design; partake in House events and lead our Charities work, making a significant difference to many less fortunate people. With such tutelage, I am confident that our leavers go into the world and make a positive imprint on their friends, families and all those they encounter. 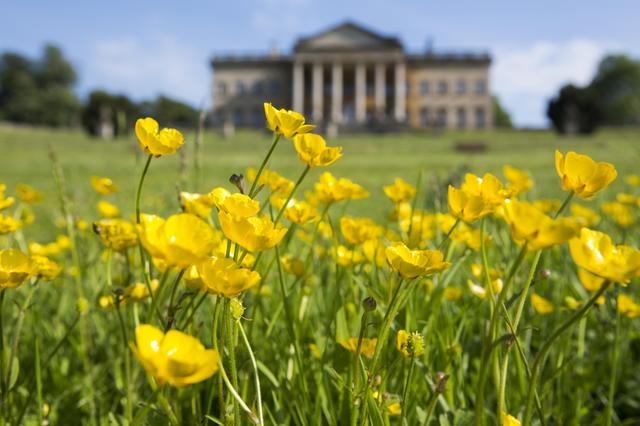 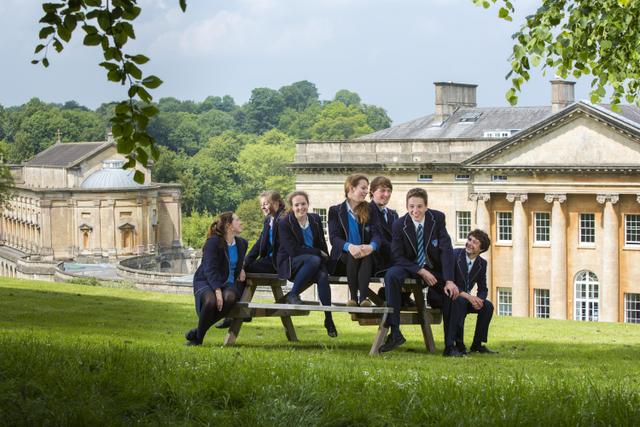 The Governors of the Prior Park Educational Trust are committed to broadening access to its schools by offering to eligible parents or guardians means-tested financial support with payment of school fees.

A range of scholarships including, Academic, Art, Drama, Music, All-Rounder Scholarships, as well as Sporting Excellence Awards are available. The Scholarship brochure indicating the benefits of being awarded a scholarship can be obtained from the Registrar.

Bursaries are awarded according to the Prior Park Schools’ Means Tested Bursary Policy in response to parental need, either to relieve difficulty in the family of an existing pupil, or to enable entry to Prior Park by pupils whose parents could not otherwise afford the fees. A Bursary Application Form is required from the parent(s) as a statement of the family’s financial position. Our Finance and Business Director will be delighted to discuss individual applications.

The College fee includes full lunch and supervised prep for day pupils. The Boarding and Weekly Boarding fee includes all accommodation costs and tuition fees excluding those outlined in the College Fees document. Every effort is made to keep 'extras' to a minimum. The International Boarding fee is applicable to all boarders that are not UK residents.

Our Fee Schedule is updated annually and can be downloaded from our website http://www.priorparkcollege.com/admissions/fees

The DT department within Prior Park College has been making single use face visors for the Royal United Hospital in Bath, as well as plastic framed face visors, which are being delivered to local GP surgeries, health centres and care homes.

9th April 2020 — In the past week, the DT department within Prior Park College has made 500 single use face visors (with cardboard head bands) for the RUH Hospital in Bath, and over 2000 plastic framed face visors, which are being delivered to local GP surgeries, health centres and care homes.

The single use visors were made with the help of the Prior community after a plea for help with assembling the masks went out through the College Facebook pages. The response was phenomenal. Kits were dropped off at 'out worker' houses and then collected a few hours later so that completed visors were delivered to the RUH the same day.

The plastic visors are made from polypropylene and the removable face shield is made using an A4 PVC binding cover. By using plastic based materials it is hoped that these can be cleaned and reused. Prior Park has used its entire stock of materials but have more on order to continue production over the Easter holidays.

Head of DT at Prior Park, Nr Faulkner commented: "We just want to do all we can to help during this crisis. The feedback has been overwhelming! I personally have taken phone calls for support from all around the country and have shared the cutting files and designs with company’s in Kent, Manchester and even America!"

A funding page has been set up to pay for more materials and already over £1000 has been donated, https://www.thepriorcommunity.co.uk/ppc-help-in-the-community-during-covid-19-crisis

A video showing how the visors are made can be viewed here: https://youtu.be/8v7dwTLqWlM

The Prior Park Schools’ Biathlon took place on Friday, 11 October at the University of Bath with 450 competitors from 60 state and independent schools across the South of England registered to take part.

14th November 2019 — The Prior Park Schools’ Biathlon took place on Friday, 11 October in Bath with 450 competitors from 60 state and independent schools across the South of England registered to take part.

Prior Park College and The Paragon Junior School run this annual event in conjunction with Pentathlon GB. In recent years, and as the competition has grown, the Biathlon has taken place at the University of Bath, allowing competitors to experience its elite athlete facilities. Encouraging the competitors every step and every stroke throughout the day were members of the GB Pentathlon team: Joe Choong, Charlie Follett, Myles Pillage, Tom Toolis and Jamie Cooke.

The age categories for the competition range from U10 to U19, with the run and swim distances varying accordingly. Each competitor’s run and swim times are combined and the scores are automatically added to the national rankings list - the top performers qualify for both the British Modern Biathlon Championships (to be held in Nottingham in November) and the British Schools’ Modern Biathlon Championships (held in March 2020).

Head of Prior Park College, Mr Ben Horan, commented “Our schools have a philosophy of ‘sport for all’ and so we are delighted to be able to bring this biathlon to Bath and provide so many students with this opportunity. I would also like to thank our fantastic volunteer helpers, sports leaders, PE staff and Kate Allenby for organising such a successful day.”

Prior Park College and The Paragon Junior School have again been rated ‘Excellent’ following ISI inspections in September 2017.

27th November 2017 — Prior Park College and The Paragon have again been rated ‘Excellent’ following ISI inspections in September 2017. The new Educational Quality Inspections (EQI) report focuses on two main areas: the quality of pupils’ academic and other achievements and the quality of pupils’ personal development. The two Prior Park Schools are among the first schools judged according to the ISI’s revised framework for inspection – to be awarded the highest category ‘excellent’ in both areas is an outstanding achievement.

Key findings from the report for Prior Park College highlight the rapid progress pupils make in their learning “and as a consequence they have outstanding achievements within and beyond the classroom.” It also notes the “great enthusiasm” demonstrated by the pupils, how “exceptionally well” students work together with their teachers and “Pupils enjoy a great deal of success in academic exams.” The inspectors recognised many areas of excellence across the College, stating the “success in a wide range of pursuits such as art and design, music and sports reflects the extensive range of talents possessed by pupils.”

The Paragon report stated that “pupils’ attitudes to learning are exemplary” and “from their earliest days in the Early Years Foundation Stage (EYFS), pupils of all ages and abilities make excellent progress overall”. The inspectors also found that The Paragon “fully meets its aim to cultivate a love of learning” and that pupils are “confident communicators. They speak eloquently, listen attentively, and write creative and factual reports expressively.”

It is not only in the areas of academic and co-curricular activities that the two Prior Park Schools score highly. The inspectors were equally impressed at their level of pastoral care. For the College, inspectors stated, “Pupils understand what is needed to keep themselves healthy both physically and mentally and have a strong sense of well-being” and that, “Pupils are excellent citizens within their own community and have developed the capabilities to make wider contributions to the wider world.”

The inspection at The Paragon determined that “pupils’ self-confidence is fostered through the very positive atmosphere of mutual respect between themselves and the adults in the school” and that their “social development is excellent. They work together extremely well and display considerable social maturity.”

Prior Park Schools’ Principal, James Murphy-O’Connor, is pleased with both reports findings, “I am delighted with the judgements made as they genuinely reflect the aims and values of Prior Park Schools. The reports were hugely complimentary about our schools and I look forward to working with colleagues and Governors to build on this success as we enter the next phase of our schools’ development.”

Here is a summary of our Admissions Process:

Please contact the College to make an initial enquiry, phone +44 (0)1225 831000 or email admissions@priorparkschools.com
A follow up visit on one of our Open events and/or visit on a normal working day is recommended. An interview with the Registrar and the Headmaster will be arranged.
Applications should be made by completing the Registration Form and returning it with the non-refundable registration fee, before the deadline date.
Entrance/scholarship examinations are taken and school reports received.
The Headmaster makes a decision and the offer of a place will be communicated to parents.
Parents are asked to return an Acceptance Form and the deposit.. The offer of a place cannot be guaranteed beyond the deadline date of acceptance of offers.


Admissions Policy
Our aim is to admit pupils with academic and other qualities such that the child would gain the maximum benefit from the opportunities available at Prior Park College, whilst maintaining a balance between day and boarding pupils, boys and girls. In the event of there being more applications than places available, places will be offered in accordance with the following criteria the weighting of these criteria may vary:

We aim to make the admission process informative and as transparent as possible.