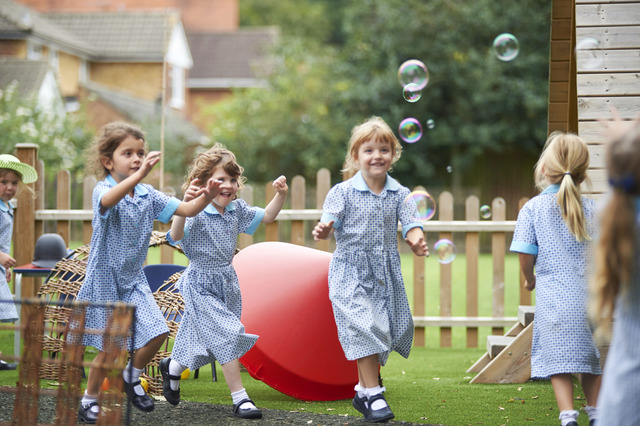 Halstead Preparatory School is a school for girls aged 2 to 11 in Surrey. We understand how girls thrive and excel in their own learning environment.

Halstead Preparatory School is an independent school with a Christian ethos and family atmosphere for girls from Nursery aged 2 years to age 11. Every girl is known and taught as an individual in a stimulating environment where respect and kindness towards each other is the norm. We pride ourselves in giving every girl an excellent and thorough preparation for senior school entry, but most importantly in preparing every girl for a happy and successful life.

In the Nursery girls may attend part-time or full-time; parents can decide how many sessions their daughter attends in a week (we recommend a minimum of 3 of the 10 available sessions).  From Reception all girls attend school full-time. There are two classes in each year from Reception to Year 6. The maximum class size in Reception-Year 2 is 16; in Years 3-6 it is 18. These small classes enable us to cater for individual learning needs and allow teachers the time to support and challenge each girl appropriately. We run a minibus pick-up service in the mornings in the Woking area.

Within our idyllic setting the girls benefit from a wide range of opportunities in first-class facilities for learning and play as well as the expertise and enthusiasm of well-qualified specialist teachers. The three courts and open green space provide plenty of opportunities for sports including netball, hockey, tennis, rounders and athletics and include a newly installed adventure play area. Our sports hall is also home to our large stage on which every girl performs in a production every year and the music suite allows for class music lessons as well as individual instrumental lessons.  The bespoke science laboratory enables the girls to develop their investigative skills as scientists through practical experiments. Creative skills are developed in the bespoke Art & Design Technology classroom and culinary delights are created in our state of the art Food Technology classroom. ICT is used across the curriculum as a learning tool with an up-to-date ICT suite, interactive whiteboards in each classroom and iPads for pupils to use. As well as classroom libraries the main school Library is a well-stocked resource where reading for pleasure and research are actively encouraged.

We work closely with parents as they choose the senior school that is right for their daughter and are very proud of the results achieved by Halstead girls in the entrance examinations – the results and long history of scholarships speak for themselves. The girls leave Halstead aged 11 as happy individuals confident in their abilities, interests and talents with a thirst for learning, many friends and so much to look forward to.

A parent recently wrote:   “Halstead is an amazing school, with an amazing staff and a special Halstead magic; I am very appreciative of everything that you have done for my daughter.”

You are warmly invited to see our happy and nurturing school in action on any school day or on our next Open Morning. 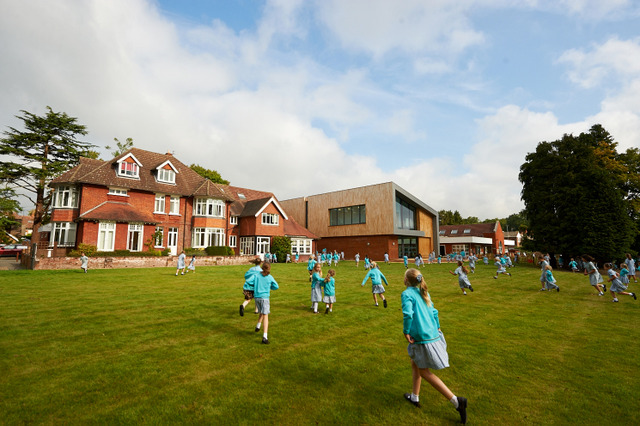 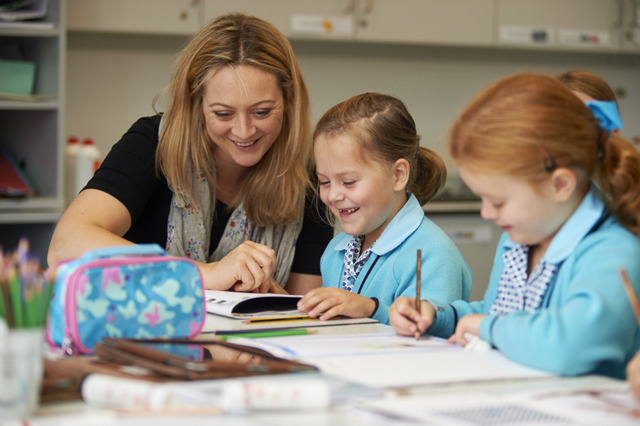 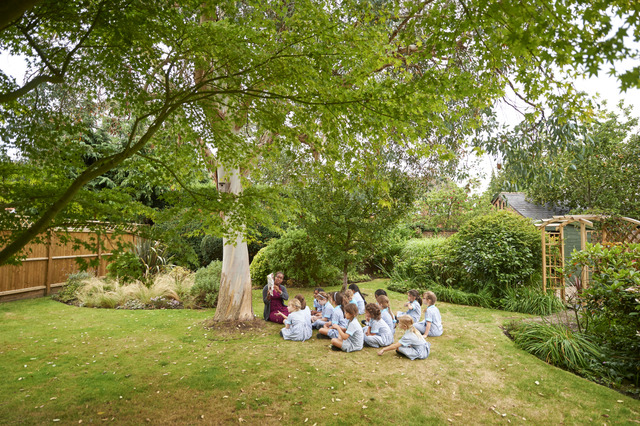 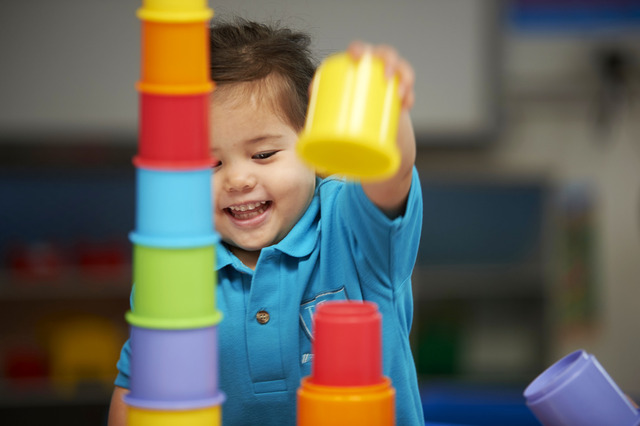 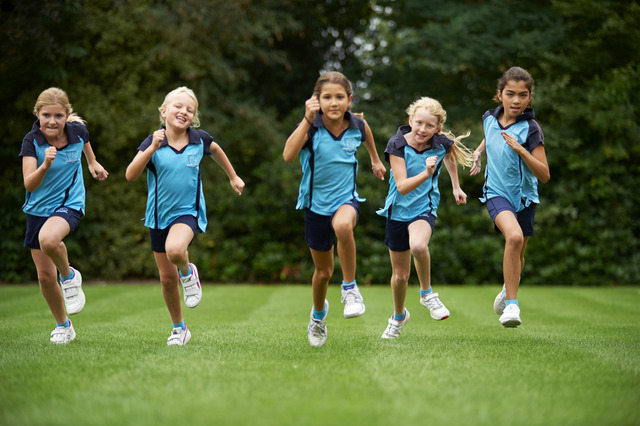 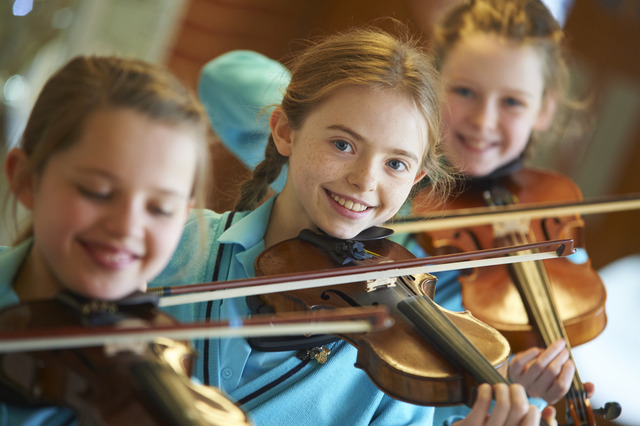 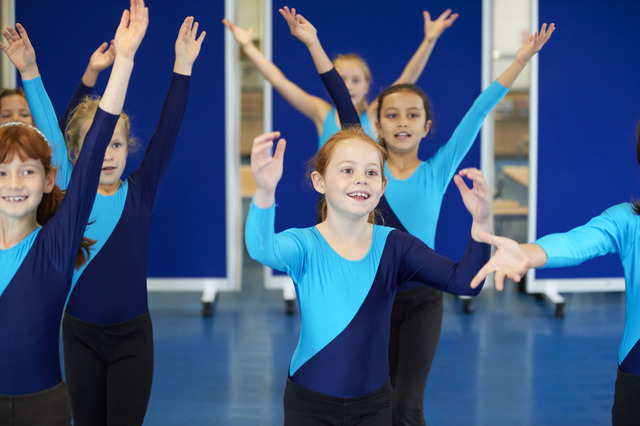 21st March 2019 — Two girls at Halstead Preparatory School, both in Year 4, helped each other memorise Pi to 417 decimal places! Their individual recitations came as part of the whole school’s celebration of Pi Day on March 14th.

Through Pi Day activities girls across the school learned what Pi ( π) is and how to use it to calculate measurements of circles. During the day they had lots of fun taking part in a maths treasure hunt, estimating the circumference of different objects using Pi, making Pi bracelets, making the largest Pi paper chain (trying to break a record), reciting digits of Pi and of course also eating round pies!

According to the Pi World Ranking List website, which names Suresh Kumar Sharma as the person to recite the most digits of pi at 70,030 in 2015, Shristi and Melina are now placed 288th in the world with a record of 417 digits in 3 minutes and 51 seconds and 3 minutes, 15 seconds, respectively. The girls will be 22nd in the UK.

As part of the school’s 90th birthday celebrations I am delighted to let you know that our first history book of the school is now available, "The History of Halstead".

23rd January 2018 — “The History of Halstead” is a beautiful, hardback 53-page book full of pictures and stories from the archives reflecting the many people involved in the school, their memories and special events over the years. It is an ideal souvenir for past and present pupils and parents or an ideal gift to be enjoyed by friends and family.

If you would like to purchase any copies please contact the school office or email Mrs Patrick at registrar@halstead-school.org.uk.

13th May 2016 — The whole school gathered to witness the Mayor of Woking officially open the school’s new Secret Garden. Everyone cheered as he cut the ribbon, unveiled a plaque and planted a tree to commemorate the 90th birthday of Her Majesty Queen Elizabeth II. The Mayor read out a letter from the Queen and everyone sang the National Anthem. Mrs Austin, the Headmistress said, “We are so lucky to have been able to purchase additional land which gives all Halstead girls the chance to enjoy even more of the outdoors. The Secret Garden gives extra space for outside activities, a vegetable patch for growing things and an enclosed peaceful garden to enjoy quiet times surrounded by beautiful  flowers, trees and shrubs.”

A 'dramatic' visit from the Mad Hatter who led pupils on a guided tour of Wonderland helped to bring the story to life and the week culminated with a fantastic Mad Hatter's Tea Party and a wonderful array of multi-coloured headwear! A fitting end to a 'Wonderful' week!

13th October 2015 — Halstead girls journeyed down the rabbit hole to a fun-filled week of activities based on the setting of 'Wonderland'. From 'Wonderland' themed read-a-thons, to themed assemblies, Mad Hatter workshops and even a Mad Hatter's tea party, the children thoroughly enjoyed being inspired and delving into the magic of this wonderful tale.

Mrs Gore, Head of English commented, “The girls have enjoyed a  'wonderful' book week and have been inspired by the magic of 'Alice' to produce some truly creative written work and poetry based on this popular children's classic.”

The pupils in Reception have been enjoying exploring their new outdoor learning environment. The enlarged space, with its different surfaces, open and covered areas and a continually changing mix of learning activities is already proving to be a superb resource for the whole year group.

8th October 2015 — There were squeals of delight as the Reception girls at Halstead Preparatory School saw the ribbon cut to officially open their new outdoor classroom.  This has been specially designed for the two Reception classes to extend their learning into the outdoors in addition to their  bespoke indoor classrooms. It further increases  opportunities to experiment, enquire, investigate and problem-solve in an outdoor setting. The purpose-built space was officially opened by Mr Chris Wardle, the Head of Pre-Prep, who said: “This is a wonderful new learning environment for the girls where they can  explore the great outdoors, develop their fine and gross motor skills and be happily challenged in their learning in a fun, safe and stimulating space. The outdoor classroom encompasses all areas of the curriculum and the girls are all very eager to try out their brand new resources.”  The outdoor classroom complements the spacious, well-resourced Nursery and Reception Early Years provision at Halstead that was judged 'outstanding' in the latest ISI inspection.

1st May 2015 — Seven brave girls from Years 4, 5 and 6 at Halstead Preparatory School participated in a mock general election debate on Thursday 30th April to try to become Halstead's Prime Minister. They came up with their own party names, colours and platform of ideas of what they would do if they were ever given the chance to be the country's Prime Minister. Some ideas included banning cars from schools to promote walking and cycling, giving free food and education to poor children around the world, making sure that there are more Science lessons at schools and "fur play" for all living things. Like the TV debates, girls were given the chance to question each other and like Question Time, girls from the audience had the opportunity to question the candidates.

On General Election Day, all Halstead girls will be given the chance to vote for one of the candidates they saw in the debate. This mock election will be conducted as close as possible to reality with vote (class) registers, teachers acting as returning officers and voting in secret using ballot papers with party logos and photographs of candidates.

Like the rest of the country, results will be declared on Friday 8th May during the school's weekly Celebration Assembly.

Parents are encouraged to visit the School either at Open Mornings or through an individual appointment with the Headmistress. Parents interested in applying for a place for their daughter are requested to complete a registration form. The completion of this form and the payment of a registration fee, currently set at £100, does not guarantee a place for your daughter but it does ensure that the appropriate documentation for subsequent stages in the admissions process is sent to parents in good time. The School will acknowledge receipt of the registration form and it is important to that the registration form is completed fully and that all information requested is given in full.

Siblings must be registered. Siblings will take priority over other applications provided the registration form has been received at least twelve months prior to the date of entry to the school.

Nursery pupils
If the School is able to offer a place, an offer letter is sent to parents of girls wishing to join the Nursery.


Reception – Year 6
Girls wishing to join other years are invited to spend a day in School before an offer is made. For girls joining from Year 2 upwards the day will include assessments in English and Maths. These assessments are used to indicate specific areas of strength and / or weakness so that the class teacher can prepare and plan according to the needs of the child.
Should the child have any specific learning difficulties, the parents must notify the School of this prior to the child’s visit/assessment day and provide a copy of all reports prepared by outside agencies, educational psychologists etc.
Parents will be notified, in writing, within one week of the visit/assessment as to whether a place at the School is available and is being offered.