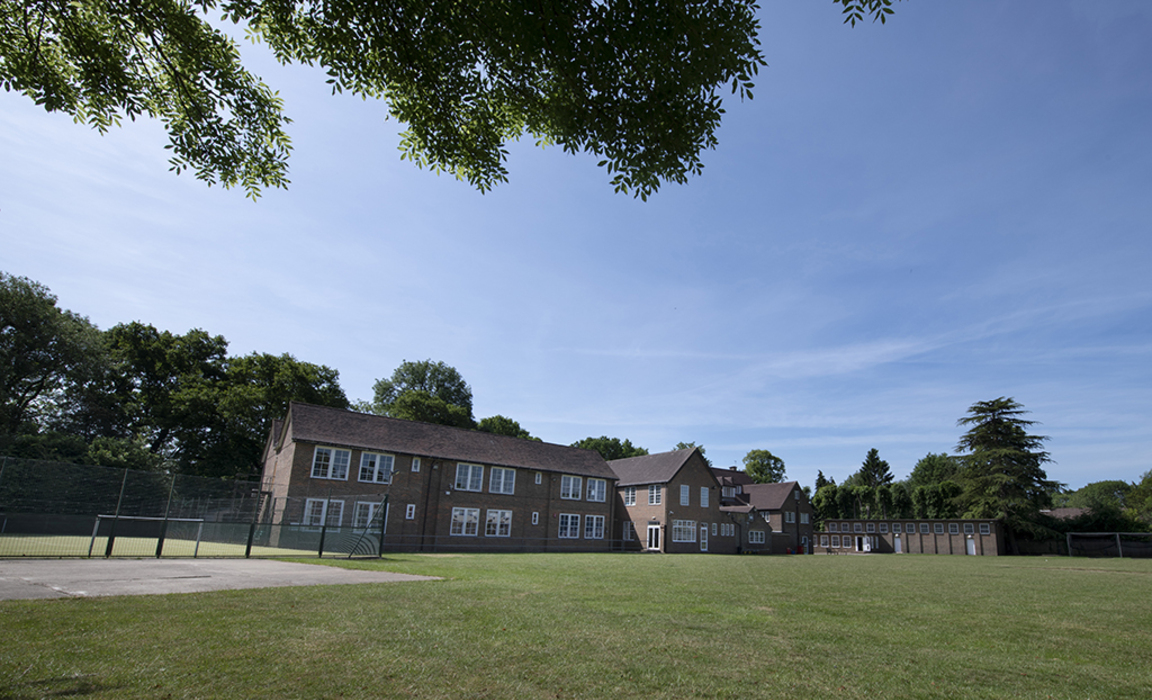 Chinthurst is a coeducational day school for children aged 2 to 11 years situated between the villages of Walton on the hill and Tadworth. It is a junior school of  Reigate Grammar, the top coeducational day school in Surrey.  Children in Year 5 can benefit from an early offer to Reigate Grammar without the need to sit the entrance exam, should this be their chosen path.

Since becoming part of Reigate Grammar in 2017, the curriculum – from the arts to technology and beyond – has been transformed, with a focus on personalised learning and individual progress. Academic outcomes are excellent with children progressing to Reigate Grammar, and other highly selective independent and state schools both locally and further afield.

However, it is the emphasis on wellbeing which really sets Chinthurst apart. Headteacher, Cathy Trundle, believes that an all-encompassing and thorough wellbeing programme is essential. The children are encouraged to take risks, try new things and failure is turned into a positive learning experience. This builds confidence and provides a strong foundation from which they can fulfill their potential. 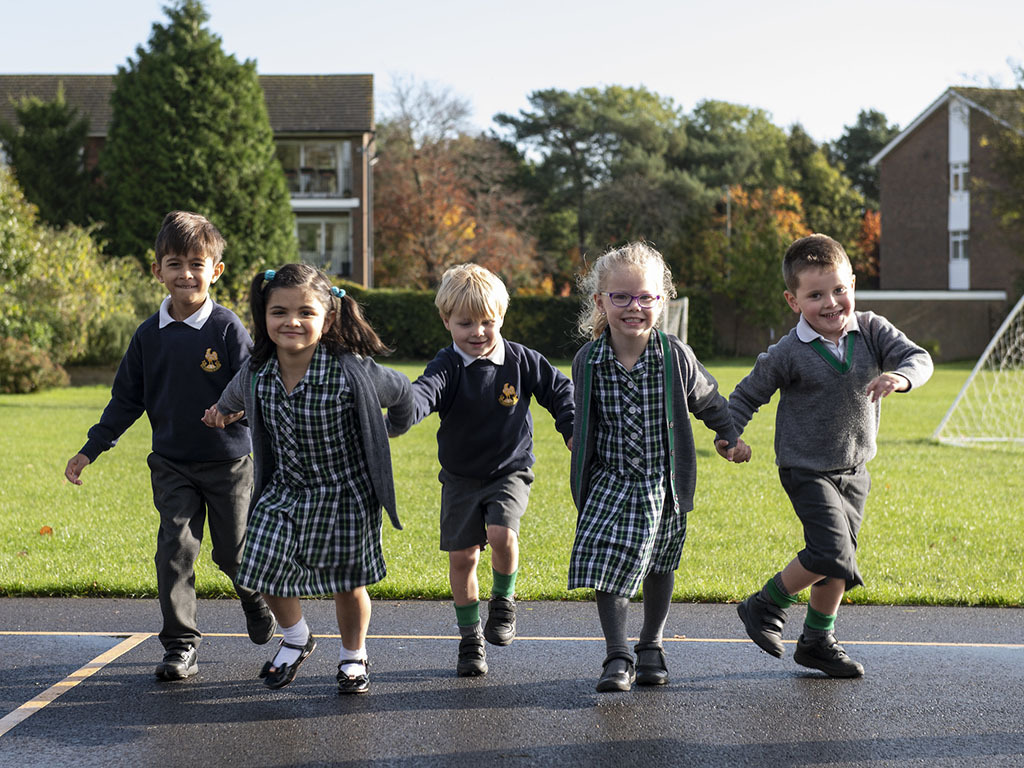 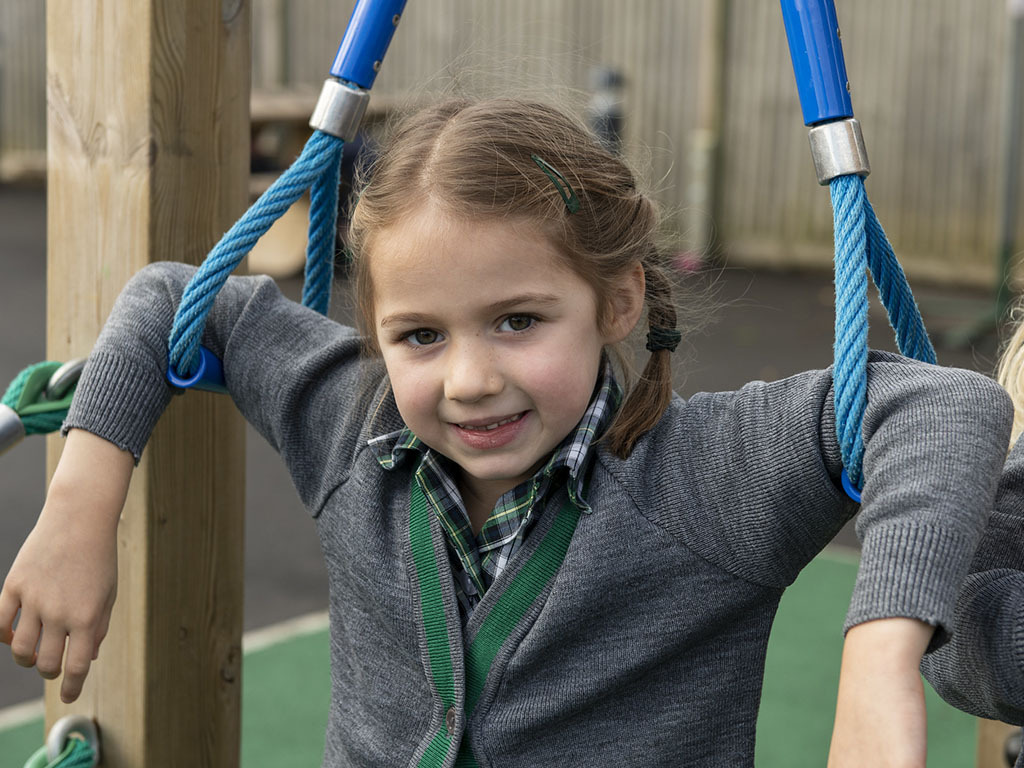 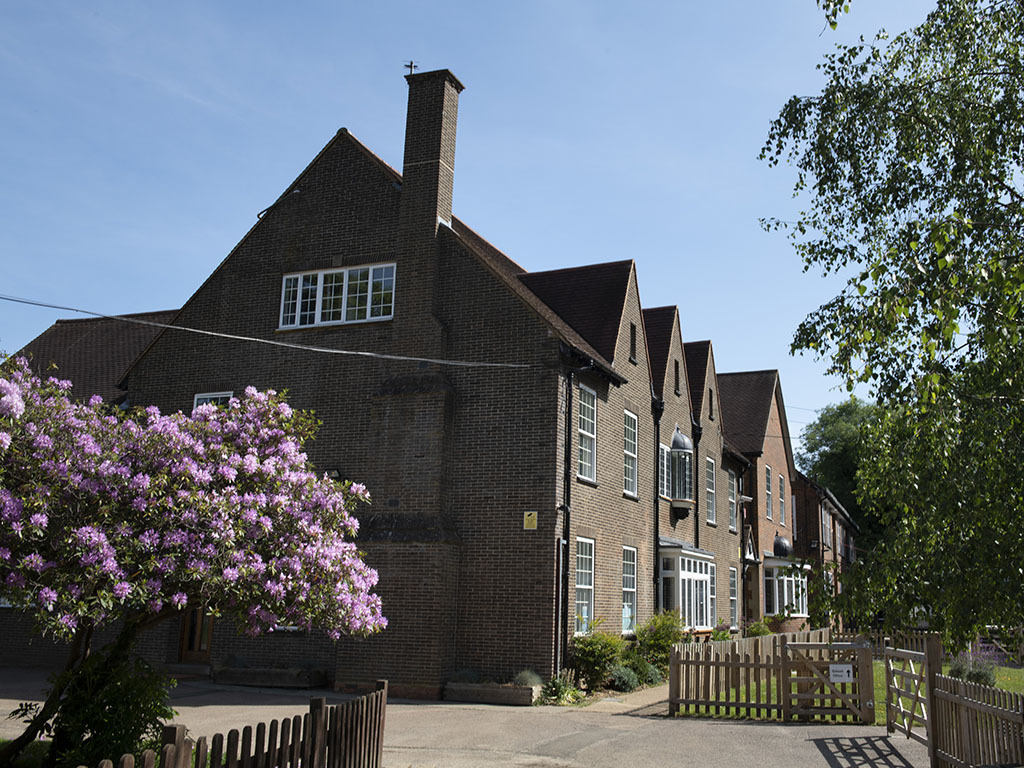 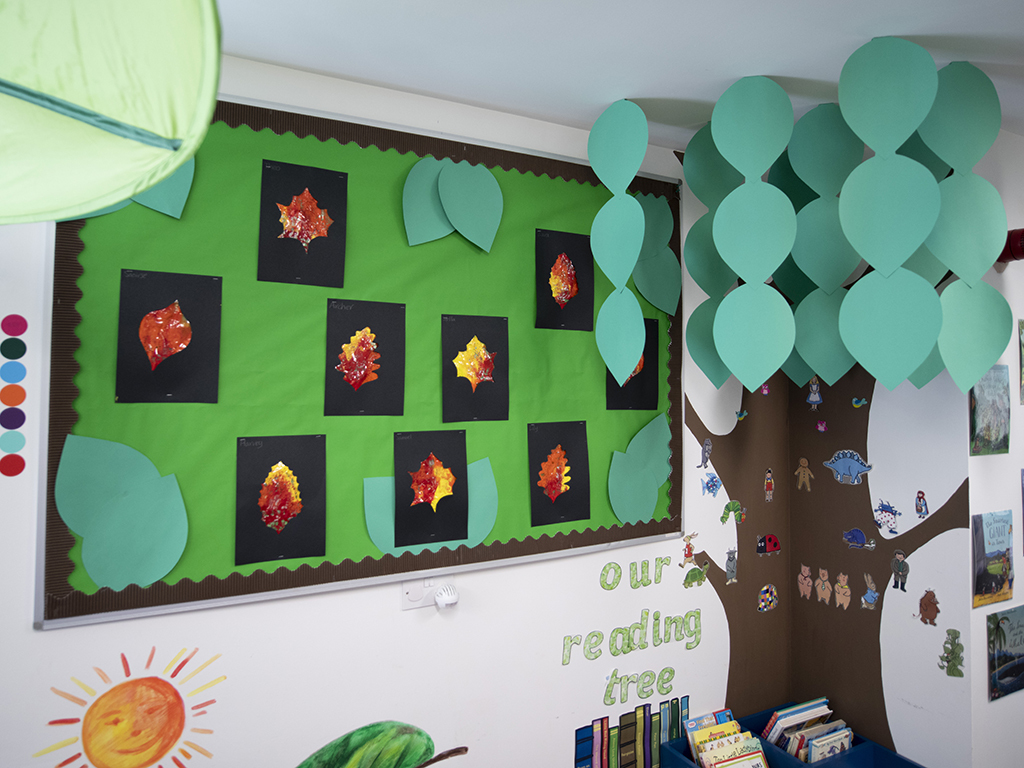 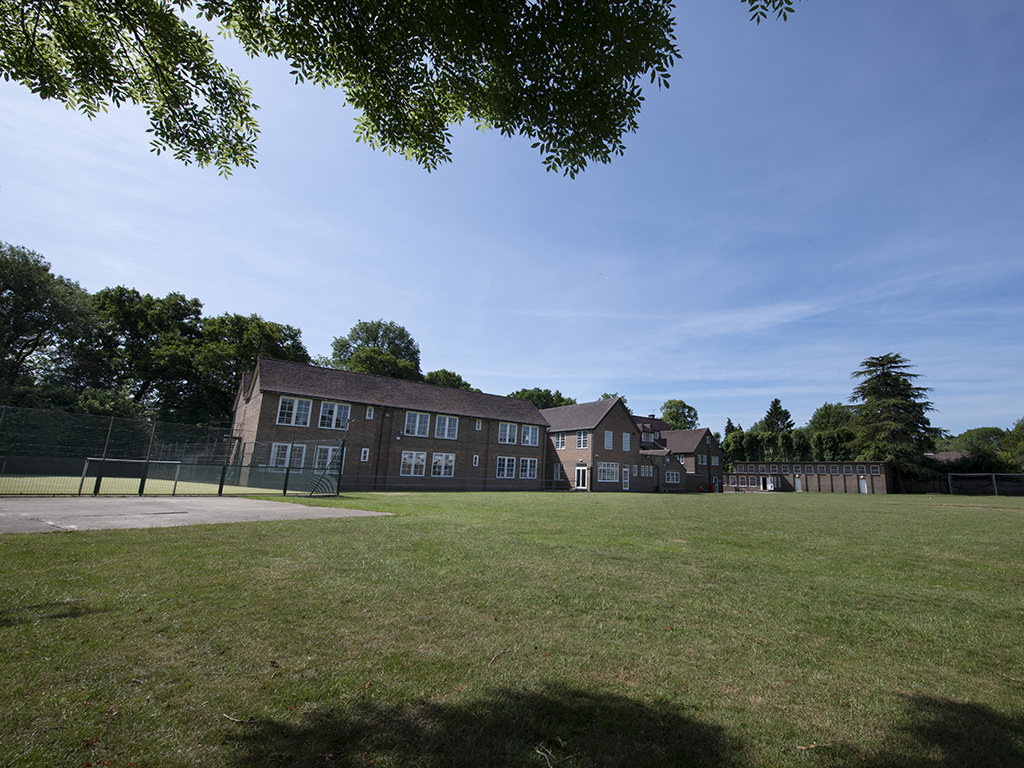 Up to date information on fees can be found on the Chinthurst School website.

The Reigate Grammar School family delights in a hat trick of award nominations.

The Reigate Grammar School family delights in a hat trick of award nominations.

Reigate Grammar School and its two preps, Reigate St Mary’s and Chinthurst, have each received an Independent School of the Year award nomination, a feat unrivalled by any other school group in the country.

6th July 2020 — The Reigate Grammar School family consists of three schools, all sharing the same ethos and values but each with its own distinctive style. Together they educate more than 1600 pupils, from 2 to 18 years old, across Surrey. With over 3000 independent schools in the UK, it is remarkable that all three schools have been shortlisted for the prominent Independent School of the Year awards 2020.

Reigate Grammar is nominated for Senior School of the Year in recognition of the school’s outstanding daily provision for each child in their care and reflecting a passion for innovation, wellbeing and reaching out to the community. Recently, RGS students have helped over a thousand vulnerable local residents as part of the RGS WeCare campaign and have launched new bursaries to help educate children of NHS workers.

Chinthurst School in Tadworth is nominated for Independent School of the Year for Wellbeing in acknowledgement of their exceptional Wellbeing at Heart programme. This whole school pastoral approach prioritises kindness and the building of strong relationships with the children above all else. The school’s selection is particularly impressive as Chinthurst is one of the only preps shortlisted in a category dominated by senior schools.

Reigate St Mary’s is delighted to be nominated for Independent Prep School of the Year. This category looks for all round excellence and a holistic approach to education which reflects RSM’s belief that happy and healthy children go on to be high achievers. Their outstanding integration of technology into the learning of even their youngest children and their award winning robotics team sets them apart from other prep schools in the area.

All three schools have provided a full online curriculum of learning for their students during the recent lockdown and the preps were pleased to welcome back all their pupils full time in June.

Reigate Grammar Headmaster, Shaun Fenton is proud of the group’s achievement. ‘The daily experience of each child entrusted to the care of the RGS family is much more important than any awards but it is wonderful that our approach to education is recognised by leading figures in the sector. It has been a challenging term but the school community has pulled together and looked after each other, evolving and adapting where necessary to ensure the continued delivery of an excellent education’.

Chinthurst dedicated a whole week to celebrating inspirational women and girls, including those within their own community, in recognition of the importance of International Women's Day 2020.

17th March 2020 — International Women's Day celebrates women's achievements, raises awareness of bias and helps to forge a gender equal world. To mark the 2020 event, Chinthurst dedicated a week to celebrating prominent female role models and to finding out more about the inspirational women who are part of everyday life at the school.

To launch the initiative, the whole of Year 6 visited Epsom Downs Racecourse to learn about Emily Davison, the suffragette who sadly died in 1913 after stepping in front of the King's horse whilst trying to promote women's rights.

As the week progressed, every girl from Year 3 to 6 chose a woman they admired (anyone from their Mums and Grannies through to JK Rowling and the Queen) and thought about why these women were inspirational. Their choices were shared with the community in a short film.

Some Chinthurst girls excel at sports that are traditionally male dominated, such as rugby and cricket, and they discussed their experiences of playing alongside the boys and how much they enjoy it. Other girls have shown exceptional artistic and acting talent both inside and out of school and this was celebrated too.

Female teachers were interviewed about their path to teaching and the careers they have had along the way. Their stories, which were so interesting and diverse, were shared with the whole school community in a bumper weekly newsletter that celebrated everything that is wonderful about women and girls today.

Headteacher, Cathy Trundle said 'Our girls are so lucky to have such accomplished role models to inspire them within the school community and outside of it. However, it is often the children themselves that inspire me and my fellow teachers. Their confidence to use their voices to speak up for what they believe is right, at such a young age, is remarkable and makes me very proud'

Chinthurst marked Children’s Mental Health week with a series of events based upon this year’s theme of ‘Find your Brave’. The school sang happy songs and wore clothes that made them feel cheerful, as well as learning how to overcome their fears

11th February 2020 — Children’s Mental Health week is a national initiative run by charity, Place2Bee that aims to raises awareness of the importance of supporting children and young people’s mental health.

The theme this year was Find Your Brave and Chinthurst School in Tadworth planned a week of events to help spread the message amongst the children.

In assemblies and form time they discussed how bravery comes in all shapes and sizes and can be about something as simple as sharing worries, asking for help or trying something new. They also explored strategies for finding their brave and how good it made them feel when they did so.

There was lots of fun too! The whole school sang happy songs and had another visit from Pets for Therapy Dog, Flash much to the excitement of everyone. The children raised money for Place2Bee by coming to school wearing something that made them feel happy - this included lots of onesies and slippers!

Headteacher Cathy Trundle was delighted with the success of the week. ‘Find My Brave week was lots of fun and the whole school enjoyed coming together to support such a worthwhile cause. We recognise the importance of good mental health and the theme this year gave the children the opportunity to talk about significant issues against a backdrop of exciting activities’.

Find Your Brave from Chinthurst School on Vimeo.

Chinthurst remembers with a sea of red poppies

Chinthurst remembers with a sea of red poppies

11th November 2019 — This year, Chinthurst School had a moving Remembrance service at The Church of the Good Shepherd in Tadworth which was followed by a minute's silence as the children surrounded the flagpole in the school's grounds . Every child from Year 3 upwards made beautiful poppies which took centre stage around the base of the flagpole. A fitting tribute to those who have fallen.

Chinthurst children were delighted to have a visit recently from Flash, a Pets as Therapy dog, as part of National Stress Awareness week. Along with his owner, he taught them how canine company can have a positive effect on wellbeing.

8th November 2019 — Research has shown that dogs in schools can bring significant benefits to children's development and have a positive impact on their wellbeing. As part of National Stress Awareness week, Flash, the wonderful Pets as Therapy (PAT) dog, along with his owner, Rachel Bullerwell, visited the Chinthurst children to teach them about ways to manage stress. They helped the children think about what they should do when they are worried about things, and how stroking a dog can help them feel calm.

The children loved interacting with Flash who enjoyed chilling in their classrooms and playing their games outside at break and lunchtime. He was a wonderful guest!

Headteacher Cathy Trundle said 'At Chinthurst we place tremendous importance on our children's wellbeing as it is so important for their future success and happiness. Flash was a brilliant guest and his visit was a fun way to teach the children strategies to deal with worry and stress'.

The children and staff at Chinthurst supported the Young Minds #helloyellow campaign on World Mental Health Day by wearing something yellow to school and learning about the importance of being mental health aware.

11th October 2019 — Chinthurst has a strong wellbeing ethos and World Mental Health Day was an ideal opportunity to focus on the importance of looking after everyone’s mental health. Community was the theme for the day highlighting the benefits of talking and being together.

The children arrived at school wearing a touch of yellow and enjoyed having their photos taken in a special #helloyellow photo booth. Much to everyone's delight, a teachers’ flash mob got the whole school dancing to ‘Happy’ by Pharrell Williams during morning break. Later in the day, the same flash mob lead a rendition of ‘We are the Champions’ by Queen to spread happiness around the school.

The inaugural Time to Talk café in the school’s sports hall foyer was open to parents who dropped by for a coffee and a chat before getting on with their busy days. The café will be open to parents monthly going forward in recognition of the mental health benefits of being part of a supportive community.

Headteacher, Cathy Trundle was delighted with the success of the day. ‘Being part of a community and having someone to talk to is such an important part of good health and wellbeing. At Chinthurst, all our children know they are loved and that their teachers are there to listen to them and support them.'

Pupils join Little Chicks when they are 2 1/2 or Reception in the Autumn term following their 4th Birthday. Places are also available to join directly into Years 1 to 6 but may be subject to assessment.

Tours of the school and a meeting with the Headteacher can be arranged at a date and time of your choice by contacting the Admissions Registrar, Louise Hughes.