Stover School provides education which nurtures, celebrates, challenges and inspires each pupil. Our holistic approach combines a progressive research based curriculum, with a resilient moral code based on sound family and Christian principles. We prepare confident and independent young people to adapt and succeed in an ever changing world.

Stover Preparatory School has a total of 128 pupils. 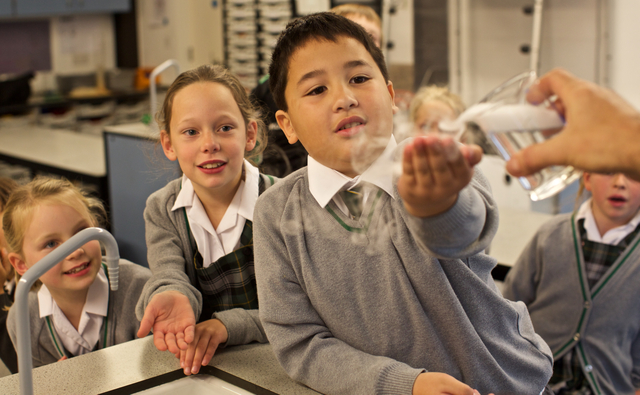 Stover's Preparatory School is located in the Clock House. Built in 1843, it is a delightful building that offers children a safe and secure environment to begin their school life and its proximity to the Senior School gives them access to all the facilities that the whole school offers.

The Preparatory School aims to provide a happy and caring environment in which children develop an enthusiasm and willingness to learn. We help them to gain confidence and to recognise and celebrate their differences. We also teach respect - for themselves, for each other and for their teachers.

We welcome children of all abilities and we are skilled at using different teaching methods and techniques appropriate to the children in our care. Their emotional and social development in these early years is also important and this sits alongside the teaching of basic skills, such as reading, writing and numeracy.

At Stover, we encourage children to communicate effectively and with confidence. We do this by encouraging them to participate in class, to enter into discussion, to perform to their friends and to parents. We have a busy schedule of concerts, dramatic performances and presentations, so that children feel the sense of achievement that fuels their self-esteem.

We are fortunate to be able to tap into the shared resources of the Senior School, not just the spacious grounds that we use for sports and outdoor activities, but also home economics, science and art rooms that give our older children a taste of life in the Senior School.

Socially and academically, our children in Years 5 and 6 are prepared for the demands they will face as they move to the Senior School. These include organisational skills, as well as learning study skills and to concentrate for longer periods. We believe that the close connection we have with pupils in the Senior School provides valuable inspiration for those who are preparing for that transition.

Bursaries are normally only available to Senior School pupils.

For more information please contact the Registrar on 01626 354505 or registrar@stover.co.uk   and download our Scholarships Booklets and Bursary Form.

Registration; to enter the Preparatory School (Reception through to Year 6) we require a completed registration form, recent school reports and a non-refundable Registration Fee of £100. Applications can be received throughout the year

Taster; an opportunity to experience a day with their peers, to put them at ease and give them a real feel for life at Stover. Taster day assessments are considered alongside their report before an offer of a place is made

Offer of a Place; we request a refundable deposit of £250 (day), £750 (boarder) and our Acceptance of Parent Contract forms be completed and returned, we will confirm your child’s place, start date and our welcome pack will be sent out prior to your child commencing at Stover

The main entry points are: 4, 7 years old, although we regularly have pupils joining in other years, where space is available. Children are welcome to join throughout the year.

On Friday 27th April, Stover School Nursery and Reception pupils took part in an appropriately wet Peppa Pigs Muddy Puddle Walk in aid of 'Save the Children'. It was a well looked forward to event and the children were excited to go for a muddy walk in the woods. It was a soggy start, however, the children had a wonderful time splashing and jumping in the puddles and even stopped off in the Forest for a quick sing-song in our woodland den.
Our Foundation Unit raised £416 for save the children. Thank you also to the parents who came along to help and for all everyone for their kind donations for this worthy cause.

Stover Girls Success in the Saddle

Stover Girls Success in the Saddle

Abbie Cox, Alex Tarrant and former pupil Tabby Downes competed in the 2ft-2ft 3 class against teams from other pony clubs in the region. The girls all went clear in both rounds and were crowned champions, leading the lap of honour out of the show ring.

In true team spirit, a quick game of stone, paper, scissors decided who took the trophy home for the first four months!.

Thankfully the weather does not dampen the spirit or enthusiasm of the school's equine enthusiasts!!