Kingshott School is an IAPS coeducational day school for boys and girls aged 3 to 13 in Hitchin, Hertfordshire.

Kingshott School has a total of 409 pupils. 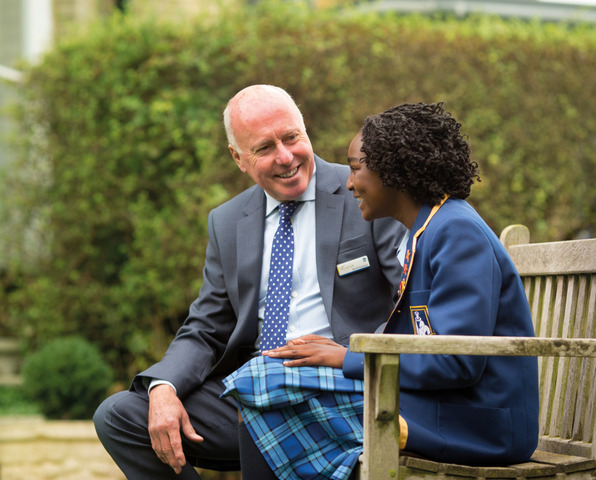 Life at school is about Learning. But learning is more than simply an accumulation of information and facts. If that were so, school would be boring. Education at Kingshott is interesting. It is exciting, and it is varied. At Kingshott emphasis is placed on making the learning experience as enriching as possible. We want our children to be happy, achieve their potential and to be a success. We believe in the children being "The best me I can be". Kingshott School is set on the outskirts of Hitchin, Hertfordshire, and provides an outstanding co-educational experience for children aged 3 to 13. Standing in 23 acres and surrounded by countryside, it is hard to believe that central London is only a 30 minute train journey away. Kingshott serves Hitchin, Letchworth, Baldock, Stevenage, Welwyn and the villages around them, towns and villages in Bedfordshire, and South Cambridgeshire. There are 365 children who enjoy the school’s excellent facilities, dedicated teaching staff, playing fields and outdoor play areas.

Kingshott School admits children with a broad range of academic ability.  We welcome children with learning difficulties, disabilities or where English is a second language. However, consideration is given as to whether or not a child would genuinely cope with the curriculum and the School environment.  Places are offered, subject to our assessment criteria, when we are confident that we can meet the needs of each individual applicant whilst maintaining the balance of needs within each year group.

Starting a new school at any age can be a daunting prospect not only for pupils, but parents too! At Kingshott, we aim to provide you with clear and comprehensive information about the admissions procedure, from initial enquiry to the first day at school.

Whilst most children join us at the start of a new academic year, admissions are possible throughout the year, subject to assessment and availability of a place.  However, we are increasingly oversubscribed and early registration is always advised, especially for our Nursery and Reception class intake.

Our Admission Officers, will be delighted to arrange an individual visit to the school for you on a working school day.

Work towards this has been ongoing for a number of years and various members of the ECO Committee can take a lot of credit. To earn the award children have been involved in numerous tree planting events, considered how to reduce our carbon footprint and looked at imaginative ways of recycling. The gold award is now in our sights!

EYFS Quality Award - One of only two schools in Hertfordshire

EYFS Quality Award - One of only two schools in Hertfordshire

Kingshott School are extremely proud to announce that this week we have been awarded an Early Years Quality Mark.

Kingshott School are extremely proud to announce that this week we have been awarded an Early Years Quality Mark. The Early Years Foundation Stage (EYFS) was established under the Childcare Act 2006 and is a framework for learning, development and care for children from birth to five. Here at Kingshott it includes the children in our Nursery and Reception year groups.

We recognise that children develop and learn in different ways and at different rates. Our children experience a wide range of activities and skills that provide the right foundation for future development as they progress through school and life. Small class sizes ensure that every child is treated as an individual, enabling all teaching staff to pinpoint the next steps in each child's learning journey.

All our staff respond to each child’s individual emerging needs and interests, to support their growth and development through warm and positive interaction. Our aim is to ensure that children enjoy their EYFS experience in the care of skillful and caring staff and make a confident and smooth transition as they move through the school. We share and communicate the child’s learning experiences and developmental milestones by working in partnership with parents.

This national accreditation is awarded to early years providers of any size within the maintained, private, voluntary and independent sector which meet the Quality Mark Standard. The Quality Mark for Early Years promotes and supports the development of young children in their communication, language and early mathematical skills. This is achieved through providing investigative learning opportunities suitable for the stage of development each child has reached, with support from skilled practitioners.

Such a positive start in their early years gives every child the ‘bedrock’ of a good education and sets them up with the skills they need for their future school and adult lives.

To achieve the Quality Mark, Kingshott had to undergo an assessment, carried out by an external accredited assessor, against the 10 ‘Elements’ of the Quality Mark for Early Years framework. These include reviewing young children’s learning needs and planning their next steps, providing safe, stimulating resources and equipment – both indoors and outdoors - and having skilled early years’ practitioners. Positive partnerships with families and effective monitoring and evaluation are also required - particularly to achieve renewal when continuing development must be demonstrated.

We are very proud of the staff for achieving this award as we are one of only two schools in Hertfordshire to gain this accreditation. Thanks must also go the children, parents and greater Kingshott community for their part in this achievement,

U11 Girls Hockey - 2nd in the plate competition

On Wednesday 21st of November our U11 Girls competed in the IAPS National Hockey finals at Rugby School. There were 6 teams in the group, they drew 3, won one and lost one which resulted in them coming 3rd in the group which is a great achievement. 3rd and 4th place teams go through into the plate competition. After scoring in the final couple of minutes in the quarter and semi-finals it meant the girls got through to the final. Unfortunately Danes Hill beat us 2 – 0. The Kingshott girls had great team spirit during the day and showed their enthusiasm, commitment and skill during every game. There were 180 schools who started the IAPS journey so to come 2nd in the plate competition at the national finals is something Kingshott and especially the girls involved should be proud of. Well done girls!

Tuesday the 20th November saw our first cross departmental SHEEP Day covering aspects of mental health, emotional well-being, anti-bullying, personal safety, economic thinking and local government/democratic thinking. Activities included a visit from Head of North Herts District Council, Councillor Lynda Needham, hands on First Aid sessions and an interactive session with X Factor band New Kings Order. The boys from the band performed a few songs for the children and then had a question and answer session with them regarding a number of topics including internet safety and mental wellbeing. PSHEE is a subject of huge importance here at Kingshott. It covers the Personal, Social, Health and Economic Education of the children but do we have questioned whether we invest enough time into it? Cross departmental staff decided that a whole day of activities would really allow our flock to embrace the subject but what is all this about SHEEP? It is merely a rearrangement of the PSHEE letters and it is something that has stuck and enabled our flock to attach more meaning to it. There are a number of very relevant similarities between our own flock and those of the wool variety – Did you know that when sheep experience stress or isolation, they show signs of depression similar to those that humans show by hanging their heads and avoiding positive actions? Sheep are intelligent, with impressive memory and recognition skills. They build friendships, stick up for one another in fights, and feel sad when they lose their friends. Like various other species including humans, sheep make different vocalisations to communicate different emotions. They also display and recognise emotion by facial expressions. Sheep are able to experience emotions such as fear, anger, rage, despair, boredom, disgust and happiness. They can differentiate facial expressions, and prefer a smile to a frown.

When Kingshott Year 3 to 8 girls arrived at a Games lessons in early January, they were really excited to find that ex-England Netball Captain and Bronze Commonwealth medallist Joanne Zinzan, was there to coach them. They realised just how lucky they were to have such a fantastic opportunity to work with Joanne as they were put through their paces and taught new skills. It is not every day that they get up close to a real national hero.

'We Will Rock You' comes to Kingshott

'We Will Rock You' comes to Kingshott

‘We Will Rock You’ Comes to Kingshott

Kingshott School enjoyed their school production of ‘We Will Rock You’ on Thursday and Friday evening.  Over 200 parents attended the events, which were staged in the School Hall to a packed audience.

The school cast of Year 7 to Year 8 children have been rehearsing for months to make the performances a resounding success.

The musical follows the success of many productions at Kingshott but is the first for Drama Teacher Mrs Claire Adams.

Mrs Adams said “We had a great team working on this musical, from the cast through costume design, our art teacher and students creating the staging, and our own pupils in charge of the lighting and sound – all of whom were brilliant”.

Set in the year 2050, ‘We Will Rock You’ is based on the songs of Queen.  The musical tells the story of a group of Bohemians who struggle to restore the free exchange of thought, fashion and live music in a distant future, where everyone dresses, thinks and does the same.  Musical instruments and composers are forbidden and rock music is all but unknown.

Talented Year 8 student Tom Scott plays Galileo with Ella Blackmore as Scaramouche and their performances were outstanding.  Other notable performances were from Asisa Kadiri as Killer Queen and Sam Reay-Jones as Khashoggi.

Kingshott School pupils were delighted to finally cut the ribbon and open their new Prep School building on Monday 02 November 2015. The Head Boy and Girl, together with House Captains and Headmaster Mr. Iain Gilmour, were handed the keys and opened the new Robinson building in front of pupils, parents, staff and Governors.

Parents of current pupils were invited to be the first to enter and tour the building after opening and they enthused about the vibrant atmosphere and modern facilities it provides. One parent commented on the “great, inspiring facilities”.

“We are thrilled that the Robinson building is now open. It provides excellent teaching facilities for our staff and a wonderful learning environment for our children ensuring we continue to be the best we can be.” Said Mr Iain Gilmour, Headmaster. “The excitement has been building throughout the school and having it open on the first day after our half term break was a real wow moment”.

The building of the new Robinson building involved the demolition of some of the older existing structures but has retained the original Oakfield House where Kingshott was born some 81 years ago. The new building has been named after Kingshott Schools renowned and respected Headmaster Mr. Rowan-Robinson.

Since 2004, Kingshott has been making major improvements to the school facilities. This began with the opening of the new Pre-Prep Department, the Rowan building, in September 2004.  Further development has seen the construction of the Ashbrook, a purpose-built Middle School building for children in Years 3, 4 and 5, which opened four years ago.  The light and airy design provides a stimulating environment for the children and teachers. This excellence continued with the brand new standalone Kingshott Nursery facility opening in 2010.

On 14 September 2015 a group of Kingshott U11 rugby players were privileged to be invited to play in a pre-season tournament to mark the start of the Rugby World Cup 2015.

Not only did they enjoy an afternoon of festival rugby, they also formed a guard of honour to welcome the Argentinian rugby team who is being hosted by Haileybury School.

Flashing cameras, ‘selfies’ and autographs galore. What a treat!